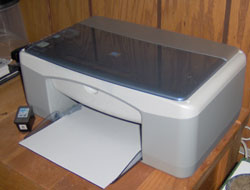 Or, "how to bypass a stupid little inf file flag for system requirements"

I cannot be alone in my use of Windows 2000 Server for my 'desktop' operating system. No, it is not common, but I am sure it is far more frequent than Hewlett Packard would have us believe. Using Windows 2000 Server enables me to store local copies of all the many websites I work on and access them as separate sites on the same computer via host headers. Windows 2000 Professional does not have that same scope of control. Do home-based businesses ever need this type of functionality? Considering the most common technology-related home-based business is web development, it's hard for me to accept that they would not.

In a recent support discussion I was told that Windows 2000 was absolutely supported by the HP PSC 1200 series printer. Yet, no matter what I tried I just could not get it to install when connected directly to the computer. Nevermind that I had been using it for 7 months across the network where it was formerly installed on a Windows 2000 Professional machine.

After attempting the CD-based installer, downloading the web package of drivers twice, and trying to use the automated web-based installer, I was still no closer to using my HP PSC 1200 directly from my own computer. Speaking to Tech Support I was informed that "the solution" is to use the HP Deskjet 550c drivers, since the Windows 2000 Server version was not, in fact, supported.

The problem with this solution, of course, is that it limits the "Printer/Scanner/Copier" you've purchased to a "Printer/Copier". This should be an unacceptable solution to anyone. The support agent didn't even offer any other alternatives until I made it plain that the solution he offered was simply unacceptable. Having worked in the technology industry as long as I have, I'm sure this is their modus operandi, so before you decide to run out to Circuit City to purchase a new printer, I'm making the real solution available here for you.

Fortunately that solution was not the only one.

You can munge the installer to allow you to install the drivers even though you're using the "wrong" operating system. For me, using Windows 2000 Server, this has worked fine. One note of caution, reboot twice before going on with your merry life, as not all files are completely installed until after the second reboot, and you may have memory access errors due to incompatible versions of existing support files.

To force the installer to continue on without erring out at the system requirements page is actually rather simple. Here's the process.

Best of luck to you,
Shawn K. Hall

Ok I have read the article but still need help. I have a usb network printer sever (sitecom model: ln-306). No matter what I do it will not find a driver for my psc1210. All it comes back with is no driver for your hardware.

I've not had to do this myself, but I have read that you need to use an HP DeskJet 550 or 560 printer driver in order to get this type of network setup and functioning correctly.

That does mean that you will be prevented from using the scanner on the PSC altogether, so you might want to reconsider setting up your network this way, if it can be helped.

Alternatively, if your network USB network print server supports "port capture" to a desktop machine, you may be able to install the printer manually to a single machine on the network (directly connected to a USB port) then disconnect it and connect it to the USB network print server. Then go into the port properties for the device and select the captured USB port for the network print server port the PSC is plugged into. To share the printer with multiple computers on your network setup sharing on the PC for that printer that it was originally tethered to directly.

Thanks for writing the article on the HP 1200 printer driver. It seems to me that HP are being less than helpful on the driver side!

I have a related problem that I hope you might be able to help with. I recently bought an HP PSC 1215, and want to run it over a LINKSYS wireless network, with an XP system. After ages of faffing around, HP said this was not possible. There was no reason as to why. However, my OLD HP printer works perfectly across the network, just by using the driver (i.e. not the all-in-one file).

Any thoughts you might have would be greatly appreciated! It seems to me that there should be a driver out there that at least lets me print over the network!

Yeah, they've got some issues on their tech support lines, too. And the people that are willing to help have to go through a long script with you first, even if they knew from go that it was a certain issue. :(

Just to make sure it's not a networking issue, you're not trying to share it between 9X (Win 95/98/ME) and NT (2K/XP) lines, are you? Inkjet style printers (PSC is one) cannot be shared across network lines that way, though laser printers can.

Aside from that, as long as the printer is tethered to another computer and shared on a homogenous network, it should work fine. There may be several rights issues making it difficult to use. I've got my own 1200 series shared between my computers here at home that way, across both a wireless and a wired network (depending on the needs of the day). It has been shared from the XP system and used on XP, 2000 and 2003 systems and been shared from 2000 server and pro to be used by XP, 2000 and 2003 systems.

The thing to check is really that the workgroup names for the systems are all the same and that a user account exists on each of them with the same user name and password for the accounts you wish to print from.

And, of course, the printer driver has to be installed by an administrator.

If that doesn't work, let me know if you've tried all that and what other steps you've taken and I'll try to help more.

Shawn, thanks to your article, I was able to hack my autorun.ini file.

My PSC 1315 would not do a real install on win2k server. And of course HP tech support knows nothing about how to get the scanner to work, even though the printer will work.

I found that one sub program did all the req checking and so I removed it from the autorun file and viola, now the whole thing runs fine.

I removed this line and renumbered the sequence; 4=hpzchk01.exe