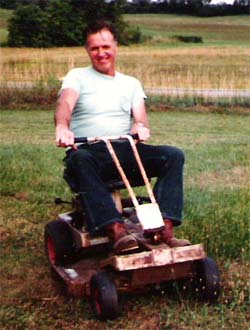 Thirty-one years ago my father passed away. His memory brings with it a flood of emotion and mixed feelings. He passed away on July 12, 1984, leaving a huge hole in my heart and a longing that would never be satisfied.

Last year, I wrote a tribute to my mother for Mothers Day. I've wanted to honor my dad for Fathers Day, in the same way, but how? When he passed away we held a small service with very few mourners in attendance. His graveside gathering was even smaller. Over the years, I have grieved for my loss, not only for the bereavement of my dad but the loss of the father I wanted, which would never be.

The problem is there are no flowery words to describe my father and his impact on my life. He was a hard man and even harder to know or understand. I pushed and shoved my way into his life as only a determined daughter can. He was fond of telling people that I was the only boy he ever raised, the problem was, I wasn't a boy and he wasn't around long enough to have raised me. That didn't stop me from being proud of his proclamation.

I am convinced that he loved me, not because of his actions or words but because of a passing look or grin that we would share on a rare occasion. Expressions of love just were not his way. The only time I heard the words "I love you," were after awkward moments of badgering that left me feeling sadder than if the words had remained unspoken.

My father was very smart though, I doubt many people could attest to that fact. I know only because I watched him work his deals whenever the opportunity presented itself. As far back as I can recall my father never had a job, he never had much money, but he always had a grin to share, a beer in his hand and plenty of guns and ammunition. Some of my fondest memories of daddy were the times he would take me with him to turkey shoots at the local gun clubs.

For lack of a better word, Daddy was what we used to refer to as horse trader. No, he didn't trade horses but just about everything else was fair game. It seemed a funny way for a person to live but it worked for him somehow.

My parents married and divorced not once but twice. As is standard, my father was ordered and refused to pay child support, and as far as I know, he never did. His standard line was, "You can't get blood from a turnip." I never minded that he didn't pay support and I doubt my mother did either. All I wanted was to spend time with him, preferably when he was sober, which he almost never was.

Learning to come to grips with my love of a man who was less than the ideal father, has taken years and still leaves me feeling bitter, angry, hurt, sad and lonely at times. I'm not alone.

As we stop to remember our Fathers this year on June 21st, it grieves me to think of all the children who have been separated from their fathers. Men have become a devalued commodity in our society. They have been stripped of their lives, their families and their dignity because of laws intended to punish them for being unable to make a marriage work. The problem is a complex one, addressing the issues won't be easy but we must not allow the problems to continue. We must work together to find a solution to the destruction of the family because the children are the ones who suffer and the damage being inflicted will follow them their entire life.

Proverbs 14:1 reminds us that...
"The wise woman builds her house, but with her own hands the foolish one tears hers down."

It is a foolish woman indeed that tears apart her own family but that is what women today are doing. Society tells us if your husband is less than you expected, less than an excellent provider and less than she needed that someone else out there will come along and make things better. She can divorce her husband and find a new one. Does it really work that way? No, but many women are led to believe that.

Most men derive their strength from their family. They need and desire the unconditional love and support of a woman and their children. A man will climb the highest mountain and obtain unbelievable goals with a wife who supports him and lets him know that she believes in him. As women we can show our husbands respect and honor them not only for their accomplishments but also for the place they hold as head of the family.

The so-called "family courts" have created more broken homes and destroyed more families in this country than all the wars combined. In most cases, the mother is granted physical custody of the children and the father is ordered to pay child support. Few men are able to make enough money to support two families or even simply two households, so they end up getting behind. Once that happens the cycle starts, of being hauled into court, losing jobs, losing their driving privileges and along with it their ability to support not only themselves but also their children. Who wins? The State.

The State will continue to collect child support payments, even after the father's child support obligation has been met. Because once the payments stop coming in, the mother goes on welfare, which reduces her monthly child support payments down to a mere $50 per month. The state pockets the remainder of the funds to cover the cost of welfare benefits. If either party moves to a new location, the entire process of legal action begins again, opening another case and the order of even more payments. This is a cycle, which can be repeated many times over; digging a hole, which the father can never get out of.

Breaking the Cycle of Divorce

How can we break the cycle and end this attack on the family?

We can begin by honoring fathers on Father's Day. We can do better by respecting and honoring them every day of the year.

There has been so much talk about gay marriage in the news these days you would think it was the most important issue facing America today. If the family courts are running men and women through the ringer nowadays, providing millions of jobs for court workers, can you imagine the boon for business they will get if gay marriage is permitted?

We must take a closer look at the marriage laws and strengthen them, making it more difficult for people to get married, especially those who already have children. We need to make it more arduous to get divorced. Unless there is criminal behavior involved, such as, proven domestic violence charges, not just state inflicted allegations. The family needs to be treated with the respect it deserves; this is the only way to protect children.

Finally, as a nation we need to learn forgiveness. We all know that "no one is perfect." Yet, we behave as if we expect perfection in those we love. If men and woman could find it within their hearts to forgive one another, they could settle their issues together, some divorces could be avoided and those that couldn't be avoided could be handled without the involvement of the family courts. Mother's and Father's need to look at what is best for their children. We look to the courts to determine what's best for the children and that is an impossible task. All the court can do is meddle in your life and try to make a best guess as to who will provide the most desirable care for the children. They don't know you, they don't know your children and they can't possibly settle any disputes fairly.

Children from divorced homes (no matter how old they are) need help. They need instruction in learning to choose a mate; they need assistance learning to love unconditionally and should seek guidance from their pastor before they take the plunge into marriage. Marriage should never be taken lightly, small issues can become huge obstacles in a relatively short amount of time. Knowing when to stand your ground in a conflict and when to give in or simply let nature take its course is not a skill that comes naturally to children who have experienced an especially nasty divorce. We often haven't learned to stand fast in our committment to a relationship. Leaving can become a habit that is a difficult cycle to break.

As I remember my father today, I still carry a sadness in my heart, not so much for my own loss but for the man my father could have been. The man my father should have been and the man I knew he would have been, had it not been for the losses and suffering he endured, during his own short life. The time we spent together wasn't perfect but it was time he was able to give me that no one can take away.

Happy Fathers Day to the Dad's in my life

In loving memory of the Father's I have known and loved
who have touched my life in a special way.