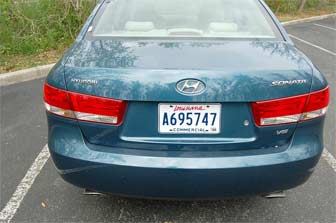 Rental car companies are offering many more hybrids and other fuel efficient vehicles in response to increased consumer demand for better mileage and lower emissions. Pictured: a Hybrid Hyundai Sonata on a Hertz lot in Louisiana.

Dear EarthTalk:
I've heard that most of the big car rental companies have gone "green" lately. What's the story?

No doubt, rental car companies large and small have responded to increased consumer demand for fuel efficiency in the last few years by stocking up on gasoline-electric hybrids and other vehicles with better mileage and lower emissions. But whether or not these companies will continue their commitment to fuel efficiency as gas prices fall and consumers begin to look again at bigger cars remains to be seen.

Hertz may have sparked the trend in 2006 when it launched its Green Collection, which includes thousands of fuel-efficient cars such as the Toyota Camry, Ford Fusion, Buick LaCrosse and Hyundai Sonata.

These models, now available at 50 airport rental locations, average 31 miles per gallon (mpg) on the highway, and most carry the U.S. Environmental Protection Agency's (EPA's) SmartWay certification, indicating lower greenhouse gas and other emissions. In June 2007, Hertz bolstered its green offerings significantly by incorporating some 3,400 Toyota Prius hybrids into its American rental fleet.

Meanwhile, other companies are towing the line as well. Avis and its partner Budget offer 2,500 hybrids (Toyota's Prius and Nissan's Altima) for rent in the U.S. And Advantage Rent-a-Car, a smaller but up-and-coming player in the industry, has pledged to turn 100 percent of its rental fleet "green" by 2010.

Not to be outdone, Enterprise — the nation's largest rental car company with a total fleet of 1.1 million rental vehicles — offers some 440,000 vehicles that get 28 mpg or better in highway driving.

Some 5,000 of the total are hybrids (Toyota's Camry and Prius and Ford's Escape SUV), while another 73,000 can run on the ethanol-based biofuel or on regular gas. Customers of Enterprise (or one of its sister brands, Alamo or National) can also opt to pay an extra $1.25 per rental to offset their carbon emissions. (Funds go to Terra Pass, which funds clean energy projects.) And last year the company opened several new "green branches" where 60 percent of the vehicles for rent are hybrids or other fuel-efficient models.

Of course, green car rentals do come with a premium. Renting a hybrid typically costs $5 to $15 more per day than an equivalent conventional car. In a recent comparison on overall costs (including gas expenses), SmarterTravel.com's Sarah Pascarella figured that a two-day trip from San Francisco to Yosemite National Park was $55 cheaper in one of Hertz's Hyundai Accent economy cars than in a hybrid Prius from their Green Collection. Comparisons with vehicles from Avis and others yielded similar results. "I found choosing an economy car over a hybrid was often the more economical choice," she reports.

In order to encourage greener rentals despite the cost premium, San Francisco International Airport now offers travelers a $15 credit if they rent a hybrid from any of the companies operating there. Elsewhere, in-town rental locations usually offer better deals on hybrids, although customers should still expect to pay a premium for renting green no matter where they are — at least until both supply and demand for such vehicles rises, which will inevitably lead to price reductions.