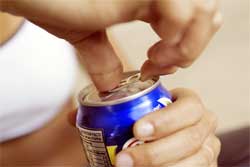 Cans and bottles of sodas emit very little CO2 directly when opened, but the production and distribution of single-serving beverages of all kinds generate untold millions of tons of greenhouse gases.

Dear EarthTalk:
How much of an effect, if any, does the carbon dioxide in carbonated beverages have on global warming?

A typical 12-ounce can of soda contains up to six grams (.013 pounds) of carbon dioxide (CO2) gas, which either escapes into the atmosphere from the liquid upon opening, or from your body after you consume the contents. So yes, drinking carbonated beverages does contribute to your "carbon footprint," but only ever so slightly.

To provide some context, every time you burn a gallon of gas driving from point A to B in your car, about 20 pounds of carbon dioxide wafts skyward (if you find this hard to believe, visit the U.S. Department of Energy's fuel economy website). So, extrapolating out, a typical car commute to work produces upwards of 700 times the greenhouse gases as drinking that can of Coke.

But cans and bottles of carbonated (or non-carbonated) drinks are still no friends of the environment. The production and distribution of single-serving beverages of all kinds generates untold millions of tons of greenhouse gases and other pollutants every year, while also wasting billions of gallons of fresh water. And once the drinks have been consumed, all those cans and plastic bottles have to go somewhere.

Some communities are diligent enough to capture more than half of all such containers for recycling—an activity which itself generates significant amounts of greenhouse gases—but that still means that more than 40 billion cans are ending up in landfills each year, or even worse, as litter, according to data compiled by the non-profit Container Recycling Institute (CRI).

Sales of carbonated soft drinks in the United States dropped for the first time in 2005, and the trend has continued since then. Industry analysts have attributed this to increasing consumer concern over health, including a desire to avoid excessive sugar and artificial ingredients.

Each un-recycled can or bottle then must be replaced by an equivalent one made from virgin materials. CRI reports that just the manufacture of these replacement aluminum cans each year generates about 3.5 million tons of greenhouse gas emissions, while also causing other environmental damage from the extraction of the bauxite from which aluminum is made. Even a larger amount of resources are used (petroleum-based in this case) and greenhouse gases emitted from the significant number of plastic single-serving drink bottles that are thrown away and not recycled each year.

Consumers can take a bite out of all this resource waste and pollution by remembering that, first and foremost, water is the least costly and healthiest beverage of all (on virtually all personal and ecological counts). And water drawn from the kitchen faucet requires no disposable packaging or shipping to get there, thanks to the highly efficient water-delivery systems that have been in place in developed countries in the vast majority of communities for a very long time.

For those who cannot get by without their soft drinks—carbonated or otherwise—the best way to lower that carbon footprint is to buy them in large containers and parse out servings in cups or glasses. A typical two-liter (67.6 ounce) plastic soda bottle holds five and a half times the liquid of a 12-ounce container and over four times that of a 16-ounce container, so it is easy to imagine the resource savings over time.