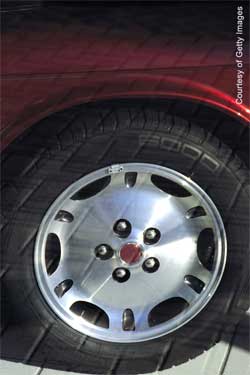 Dear EarthTalk:
Is it true that driving with soft tires wastes energy and results in more pollution?

When tires are not inflated to the pounds per square inch (PSI) rating recommended by manufacturers, they are less "round" and require more energy to begin moving and to maintain speed. As such, under-inflated tires do indeed contribute to pollution and increase fuel costs.

An informal study by students at Carnegie Mellon University found that the majority of cars on U.S. roads are operating on tires inflated to only 80 percent of capacity. According to the website, fueleconomy.gov, inflating tires to their proper pressure can improve mileage by about 3.3 percent, whereas leaving them under-inflated can lower mileage by 0.4 percent for every one PSI drop in pressure of all four tires.

That may not sound like much, but it means that the average person who drives 12,000 miles yearly on under-inflated tires uses about 144 extra gallons of gas, at a cost of $300-$500 a year. And each time one of those gallons of gas is burned, 20 pounds of carbon dioxide is added to the atmosphere as the carbons in the gas are released and combine with the oxygen in the air. As such, any vehicle running on soft tires is contributing as much as 1.5 extra tons (2,880 pounds) of greenhouse gases to the environment annually.

Mechanics advise drivers to check their tire pressure monthly, if not more frequently. The correct air pressure for tires that come with new vehicles can be found either in the owner's manual or inside the driver-side door. Beware, though, that replacement tires may carry a different PSI rating than the originals that came with the car. Most new replacement tires display their PSI rating on their sidewalls.

Also, tire pressure should be checked when tires are cold, as internal pressure increases when the car has been on the road for a while, but then drops when the tires cool back down. It is best to check tire pressure before heading out on the road to avoid inaccurate readings.

As part of the Transportation Recall Enhancement, Accountability and Documentation Act of 2000, Congress has mandated that automakers install tire pressure monitoring systems on all new cars, pickups and SUVs beginning in 2008. To comply with the regulation, automakers will be required to attach tiny sensors to each wheel that will signal if a tire falls 25 percent below its recommended PSI rating. Car makers will likely spend as much as $70 per vehicle to install these sensors, a cost that will no doubt be passed along to consumers. However, according to the National Highway Traffic Safety Administration, some 120 lives a year will be saved once all new vehicles are equipped with such systems.