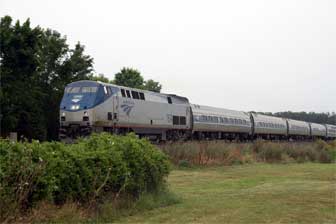 The U.S. government created Amtrak in 1971 to resuscitate train travel, which had dropped significantly since its peak in 1929. But ridership is low compared to that of other developed countries.
Image by J.P. Mueller, courtesy Flickr

From E/The Environmental Magazine
with comments by the Editor

Dear EarthTalk:
If train travel is so much less polluting than driving or flying, why are passenger rail options in the U.S. so limited compared to Europe? And is anything being done to shift more travelers over to American rail lines from cars and planes?

It's true that train travel is one of the lowest impact ways to get from point to point short of walking, jogging or bicycling. In the early part of the 20th century, with car and air travel both in their infancies, taking the train was really the only practical way for Americans to get from city to city.

And take the train they did: By 1929 the U.S. boasted one of the largest and most used rail networks in the world, with some 65,000 railroad passenger cars in operation across some 265,000 miles of track.

But a concerted campaign by U.S. carmakers to acquire rail lines and close them, along with a major push in Congress to build the world's most extensive interstate highway system, combined to shift Americans' tastes away from rail travel and toward cars.

As a result, while Europe focused on building its own rail networks, the U.S. became the ultimate auto nation, with more cars per capita than anywhere else in the world. By 1965 only 10,000 rail passenger cars were in operation across just 75,000 miles of track.

In response to the declining use of America's rail network, the U.S. government created Amtrak in 1971 to provide intercity passenger train service across the country, running mostly on pre-existing track already in use for freight transport. Today Amtrak runs some 1,500 rail passenger cars on 21,000 miles of track connecting 500 destinations in 46 states. In 2008, upwards of 28 million passengers rode Amtrak trains, representing the sixth straight year of record ridership for the publicly owned rail line. Despite this growth, the U.S. still has one of the lowest inter-city rail usage rates in the developed world.

But that may all change soon. In the spring of 2009, Obama allocated $8 billion of his stimulus package toward development of more high-speed rail lines across the country, citing the need to reduce both greenhouse gas emissions and reliance on foreign oil. Currently only one high-speed rail line exists in the U.S., Amtrak's Acela Express, which can reach speeds of 150 mile per hour on its Washington, D.C. to Boston route. The success of high-speed, high-efficiency "bullet" trains in Asia and Europe — where train rides can be as fast as flying but without the long waits and security hassles — has helped convince American transportation analysts that the U.S. should also take the high speed rail plunge.

The first round of federal funding will go toward upgrading and increasing speeds on existing lines, but the majority of it will be used to jump-start construction of new high speed lines in 10 corridors across the country, including in northern New England, across New York State, across Pennsylvania, in and around Chicago, throughout the Southeast, and up and down the length of the west coast.

A 2006 study by the Center for Clean Air Policy and the Center for Neighborhood Technology concluded that building a high speed rail system across the U.S. (similar in scope to that proposed by Obama) would likely result in 29 million fewer car trips and 500,000 fewer plane flights each year, saving six billion pounds of carbon dioxide emissions — the equivalent of removing a million cars from the road annually.