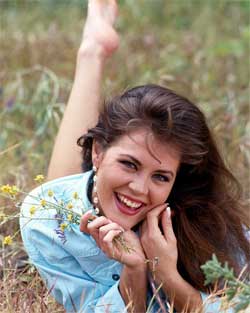 A Young Women Comes of Age

Let's face it; incest really is an ugly word. For me it conjures up repugnant images of a 50-something man staggering drunk, and reeking of cheap whiskey. His leisure time is spent staring at young women with a disgusting leer on his face.

Reality can be so much different.

I've stared down the attacker and fought myself out of more than one rape attempt as a youth. I was blessed to have escaped more than one possible tragedy. I was the girl who walked the street at night, working the local bars all while barely covering the essentials.

It terrifies me even now to think of that first time. One black starless night I heard sounds outside the window of my tiny box of an apartment — basically a studio bedroom with an attached bathroom and kitchen. It covered just the essentials of living.

From the time I was 8-years-old, I carried a pocketknife religiously. The knife was oiled, and it opened as smooth as butter. I learned to whittle as a child, we played Mumbly Peg as a youth and I made no bones about the fact that I carried one or that I was prepared to use it — and I was.

My daddy had a tiny little pearl-handled Colt Pistol that I wanted badly. He had it for sale for $80 — I had no idea what the gun was worth — even today I haven't a clue. I trusted him and he knew me. He had trained me well; he and I both knew I could and would use it, if provoked.

He refused to sell me the gun. I've had guns over the years; a shotgun, even a pistol but I kept it in a place of honor, in the drawer near my pillow and the bullets were in a locked box. My late husband kept a couple handy, in case of emergency, but I couldn't tell you where.

It was only natural for me to check the location of my knife. I was getting ready for bed, so opened it up and put it under my pillow, just in case. I was prepared. I slept well that night and went about my business the following day.

The very next night, a big black bastard broke into my apartment, removed all his clothing and pulled his sweater over his head, in an attempt to hide his identity. I struggled, I kicked, I got one arm loose and pulled on that sweater will all my might. When I discovered it was my neighbor — my friend's brother, I was furious. I fought with all my might (all 110 pounds of me) and he fled out the door and down the street — in all his glory.

I shudder to think what I might have done, had he broke in the night before. I slept with an open knife under my pillow; there is no doubt in my mind that I would have killed him. Sure I hate the guy but I can't imagine wanting him dead. He was a sick man, who needed help.

A few months later some chicken looking pimp guy tried to pick me up off the street and take off with me. Fortunately, I had my trusty knife with me. I pulled it out of my back pocket, whipped it open, stuck it up to his throat and lowered my voice several octaves and said, "If you don't let go of me right now, I'm going to slice your throat wide-open."

It didn't take him all day to let go of my neck, which he had been holding from behind. Shocked as I was with knees wobbling, I bolted down the street. As luck would have it, the "local cop shop," better known as the county jail was just three blocks away and I was a track star.

The police picked him up 15-minutes later. He was a recently released parolee who had served a lengthy sentence for rape. I wasn't even required to testify in court. He was on parole and this was clearly a violation.

I'll never forget the night I was staying at grandma's house, I was about 17. Daddy was lying on one end of the couch; I was laying on the other. I was trying to get close to my dad because he wasn't around when I was growing up and I felt I had missed out on a lot.

He saw a developing young woman. I tried not to notice but my body was sending off one signal, with my skintight jeans and clingy barely-there top. To this day I don't know if daddy really did anything but I vividly remember feeling very uncomfortable all of the sudden. I jumped up from the couch and started picking up the house, clean the dishes — anything to avoid being in the same room with him.

Daddy had never before made me feel uneasy in any way and I never had that feeling again after that night. That one time was enough to scare me. From then on, I always made sure I was dressed modestly in front of him. I tried to act more lady-like and maintained a proper respect.

I let him know that he held a place of honor with me and that I loved him as my father and I depended on him to be my knight in shining armor — certainly not a predator.

From these and many other experiences — some just as grueling — I've learned that we have much more control in the outcome of our lives than many of us would like to think. There are simple steps every women or young girl can take to have a hand in the outcome of just about any situation.

As women we have much more power than most of us think we do. I love that I can dress like a lady and that even mouthy teenagers are respectful to me when I tell them to watch their potty mouths. Of course I treat them with respect, when they see that I am matter of fact about it and that bad language is not proper in public, they are sweet about it.

It feels good to have those small victories. I'm trying to let our local young people know that people do care how they behave in public. I know I used to straighten right up when taken to task at that age for my behavior. I'd never act up in front of my grandmother and I think most kids are that way.