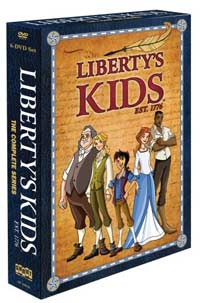 Our history is often different than what we think it is. Did you know that some people wanted George Washington to be the King of America, not the President? Meet George Washington, Benjamin Franklin, Thomas Jefferson, John and Abigail Adams, Paul Revere, Benedict Arnold, Deborah Samson and some of the heroes behind the American Revolution as they come to life in the popular animated series Liberty's Kids.

Offering rich animation and engaging storytelling, The Complete Series of Liberty's Kids is star spangled with respected news journalist Walter Cronkite as Benjamin Franklin leading an all-star voice cast comprised of some of the biggest names in Hollywood.

Music sensation Aaron Carter lends his voice as Joseph Plumb Martin and performs the theme song. Featuring all 40 action-packed episodes and a wealth of bonus content, the collectible Liberty's Kids: The Complete Series DVD box is priced to own at $59.99, on sale now for only $32.48.

Poised to attract an audience of kids, parents and educators, the stories told in Liberty's Kids comprise the fabric of American history and the ideals on which our country was built — patriotism, freedom and democracy. Moreover, this acclaimed animated series enlightens today's youth by exploring the profound impact of the American Revolution and relating it to issues that face all of us today.

Written under the supervision of Pulitzer Prize winning author Jack Rakove, Liberty's Kids: The Complete Series vibrantly brings America's history to life and depicts key events from the American Revolution as seen through the eyes of three kids who work in Benjamin Franklin's print shop. The kids may be fiction, but all of the history is accurate and authentic.

Available for the first time 960 minutes of animated and educational fun on DVD!

Don't miss out!
Liberty's Kids: The Complete Series
Save $27.51 on Amazon!

Liberty's Kids was a revolutionary new television series created for children, when it first aired in 2002. The program is both educational as well as entertaining. This sophisticated animated drama, with an all-star cast was created with children ages 7-12 in mind. Liberty's Kids is one of my favorite shows of all time! [A total of 40 episodes aired on PBS from 2002-2004, unfortunately, the program has since been cancelled.]

In this historical drama the story is told of the American Revolution and the birth of our nation through the eyes of two teenagers — a young girl from England who is visiting America, and a boy who is an apprentice at Benjamin Franklin's print shop — along with Henri, their young French friend, and Moses, a former slave who is now a free man. The characters of Sarah, a headstrong British loyalist, and James, a cocky young colonist, give us both sides of the story.

Liberty's Kids is an exciting historial adventure based in fact, which allows today's kids to discover the real heroes and events that gave birth to the United States of America. The kids meet up with revolutionary soldiers, spies, American Indians, Torries, traitors, Hessians, statesmen, farmers and various townsfolk, in the midst of one of the most dramatic times in America's history. In doing so, they gain insight into the complex ideas, perspectives, and motivations behind the American Revolution.

While based on historical events, Liberty's Kids touches on issues that are still current in modern America — gun control, taxation, race relations, freedom of the press, and the role of government. With all of the politically correct textbooks and liberal-minded programs being produced these days, it's refreshing to see that this show did not rewrite history, but portrays it accurately and patriotically.

George Washington is presented as a noble, larger-than-life hero we can all look up to. He orders his troops to study Thomas Paine's Common Sense pamphlet "as you would learn your Bible." In one episode, Patrick Henry recites his famous speech, and I was impressed that the scriptwriters didn't edit out his references to God. The phrase "God be with you!" is also clearly stated by Nathan Hale, and several other episodes contain biblical references as well.

Shout! Factory is a diversified entertainment company devoted to producing, uncovering and revitalizing the very best of pop culture. Founders Richard Foos, Bob Emmer and Garson Foos have spent their careers sharing their music, television and film faves with discerning consumers the world over.

The Creation of Liberty's Kids

Liberty's Kids is the brainchild of Kevin O'Donnell, a well-known animation producer, and Andy Heyward, chairman and CEO of DIC Entertainment, a children's entertainment company (and former Disney subsidiary) that owns Inspector Gadget, Madeline, Sonic the Hedgehog, Captain Planet, and Where on Earth is Carmen Sandiego?

O'Donnell, who admits to a skimpy knowledge of American history, first began to think about an animated American history series after Heyward, just back from a family trip to Washington, D.C., gave out copies of the Declaration of Independence and the Constitution as party favors at a lavish birthday party. Handling the fake parchment documents, O'Donnell found himself inspired, and soon the idea for an American history program, originally titled Poor Richard's Almanac, was pitched to PBS. [Learn More]