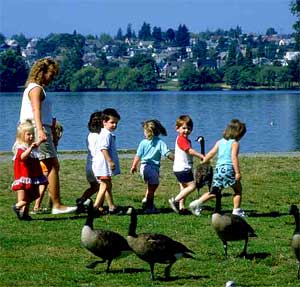 Where's the mystery of Socialization?

Three weeks ago, I quoted Fred Frankel, Ph.D., on the rules of etiquette for joining other kids at play. Dr. Frankel contends that socially well-adjusted adults have mastered the intricacies of such social codes, from an early age. His book is chock-full of tables entitled "The Rules of Being a Good Sport," "The Rules of Being a Good Host," etc., etc. (Yesterday, I forwarded Homer Simpson's "Code of the Schoolyard" as an addendum.)

The acquisition of such social codes is what many people have in mind when they ask, "What about socialization?"

(They also seem concerned that homeschoolers are being deprived of the schoolyard's core curriculum--such lessons as "How Not to Draw Attention to Yourself, So You Won't Become a Target" and "How to Pretend That Humiliating, Degrading Treatment Doesn't Bother You.")

But are any of these sets of rules prerequisites for socially successful adulthood? Or childhood, for that matter?

Our consensus on CaliforniaHS seems to be that, with the exception of the Golden Rule ("Treat others as you would like to be treated yourself"), these much-ballyhooed codes of childhood behavior hold little or no relevance for homeschooled kids. The National Post Online article to which Morgan referred supports this conclusion:

"Contrary to the popular belief that children educated at home are disadvantaged because of a lack of peers, [a new] study by the Fraser Institute shows they are happier, better adjusted and more sociable than those at institutional schools." (The full text of the article, dated October 15, 2001, is unfortunately no longer available online.)

Homeschoolers are doing just fine on the social skills scale, and they are ignoring many of Dr. Frankel's rules while they do so. Homeschooled kids happily play together across a much wider range of ages and abilities than Dr. Frankel recommends. They are less self-segregated by sex than he expects schooled kids to be, and peer rejection and ostracism occur to a far lesser degree.

A dutiful mother took her daughter to the pediatrician one day. While there the young doctor discussed which innoculations he thought the daughter needed. Then remarked that since she was homeschooled, one of them wouldn't be necessary until she left for college because she wasn't in contact with other people.

Without batting an eye, the mother replied, "She's not incarcerated. She's homeshooled!"

In our discussion of Dr. Frankel's five-item "Checklist for Joining Other Children at Play," we noted that homeschooled kids will usually invite a kid on the sidelines to join them right at Step One, thus making Steps Two through Five rather moot. Homeschoolers are simply friendlier than the kids in Dr. Frankel's experience. They're more inclined to recruit "poor Rudolph" to join in their reindeer games than [public] schooled kids are.

So, if the type of social code-acquisition that takes place in unfriendly schoolyards is so darned important, why are homeschooled kids "happier, better adjusted and more sociable" than children attending institutional schools? The overriding goal of these rules of etiquette is to help people avoid giving offense to others, yet homeschoolers seem to disregard them with impunity--transcend them, really. What gives?

I personally believe that the secret of homeschooled kids' success is simple: they sincerely value other people more than the average institutionally-schooled child does. At least three factors encourage this heightened respect for others.

First, there's the civilizing influence of near-constant parental presence. By this I do not mean that homeschooled kids treat each other with respect because of the immediate threat of Mom's disciplinary action during playtime. I mean that homeschooling parents can take advantage of opportunities to transmit core values like the Golden Rule all day long, so their kids are more likely to have internalized such respectful principles by the time they show up at the park.

Second, homeschooled kids treat others well because they see the value of expanding their circle of friends. When a kid shares captivity with thirty classmates on a daily basis, she may consider everyone outside her immediate clique of four or five girls to be expendable. But given homeschoolers' more limited pool of potential playmates, they know it would be foolish for them to discard a potential best friend on the basis of a few years' age difference, body size and/or weight, hairstyle, or other irrelevancies.

Rather than being "disadvantaged by a lack of peers," I believe that homeschoolers' "lack of peers" is precisely the reason they tend to be "more sociable" than other kids.

And third, since they do not have a continuous audience of peers telling them with whom they may associate, if they wish to avoid teasing and ostracism, homeschoolers' one-on-one friendships can be a more private matter...more personal, more honest, more heartfelt. If a homeschooled kid strikes up a conversation with a girl after ballet class, it's none of her Girl Scout friends' business; the new friendship exists in its own universe, on its own terms. A homeschooler can develop her own criteria for what kind of person makes an attractive friend.

(It suddenly occurs to me that I have yet to see homeschooled preteens engaged in public displays of affection for the opposite sex, although I frequently witness such displays as I drive past the local junior high and high school. Do the French-kissers really love each other so intensely that they are blind to the crowds of their classmates and teachers flowing around them? No, it's far more likely that the "passionate" couple has merely staged the whole disgusting episode--actually, the whole disgusting relationship--for the benefit of the largest possible audience. Their behavior is the equivalent of screaming, "Look at me, everybody, I've got a boyfriend/girlfriend! Lookee, lookee, lookee!")

Anyway, back to the concept of genuinely valuing others.

Most of the social codes outlined by Dr. Frankel have at their basis in avoidance; if you violate these rules, you may end up offending someone, with dire social consequences. But if homeschoolers simply practice respect for others, that's much more proactive and positive. It's also more practical than memorizing a bunch of rules for various situations. Respect is always appropriate, and always appreciated.

Contact the author: Julie Ann Sih
as posted on CaliforniaHS