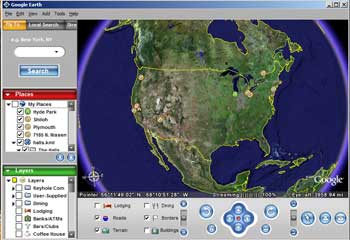 I have a confession to make. As far back as I can remember I have been one of those freaks who really love Geography. Growing up I was always reading about far away places, like Antarctica, Iceland and the Falkland Islands.

I dreamed of seeing the world and all it has to offer - firsthand. I'm thrilled to meet people from foreign countries. I enjoy pumping them for details and hearing tidbits about their native land, not the ordinary things but how the people live and their customs and culture. I find it simply facinating.

That is partially why I am simply captivated by Google Earth, a program my husband shared with me. He is always sending me links to new search engines and resources. This one simply blew me away. The download and installation was fast and easy (on DSL), after which we spent hours exploring our world. The program won't allow you to talk to people around the world (yet). However, if you have any interest in topography, this program will delight you.

Google Earth is an application, which combines local search capabilities with satellite imaging and maps from around the globe. Google offers a free version, not a trial, but a full-version, available to the masses. Google Earth Plus is an optional upgrade adding GPS device support, the ability to import spreadsheets, drawing tools and better printing for a cost of $20 per year.

Be sure to have Google Earth installed prior to clicking the link below.

This simple example of a KML file describes several points of interest into our own lives, and a very basic example of one of the features of KML files. Other ways you can use them include mapping (of course!) to provide details about destinations and directions to and from various locations, icons pointing to your business and appropriate links within the descriptions.

It was once appropriate for every business website with a brick and mortar location to include a link to a MapQuest map of their location. Will it now become necessary to provide KML links as well? Time will tell.

Currently, the application includes detailed imagery of the United States, Canada and the United Kingdom, as well as many major cities in other countries. The medium to high resolution terrain provides a detailed view of the entire world. The program allows you to "Fly To" aerial views of any location on the planet.

The control console allows you to zoom in many levels, in fact we were able to find our old house in Citrus Heights, CA. The satellite image they used was several years old. From the image it was relatively easy to pinpoint because of the playground equipment, visible from space in our backyard. Our trampoline including the 40-inch soccerball, which was still inside the enclosure and my backyard swing, were all clearly visible on screen. We were totally amazed.

Of course such high resolution wasn't available for every location, unfortunately. However, I will say the view of the Grand Canyon, my first trip out, was incredible.

The "Fly To" feature accepts an address, place name, cross street or simple Latitude/Longitude coordinates and zooms you quickly in to the specified location. Using the the controls at this point allows you to zoom, tilt, pan or rotate the view, for amazing results.

Google Earth provides the option of displaying local lodging, road markers, terrain, local dining options, geographical borders and 3D buildings over the satellite image. I was a little disappointed to find a very limited selection of lodging and dining options for the areas I checked. I assume this will be a selling point for advertisers, perhaps a feature, which will later be tied to Google Adwords.

Even with all the neat tools to play with, what really amazed me the most was that my eight-year-old son came over to check out what I was up to and stayed. He was so interested in Google Earth that he actually took my mouse away from me several times, just so he could "check something out". We had to leave an hour later or he would probably still be playing with it.

Being raised with a computer he's not the easiest child in the world to impress and I couldn't help but notice he was really into playing with Google Earth. The controls were easy for him to understand and manipulate. What a terrific geographical tool for teaching our children about the world around us.

I've had several map programs in the past and while this isn't MapQuest, in some ways it's better. Google Earth is an awesome application, blending the best of satellite imagery with Google's search and mapping capabilities.

I'm always on the look out for free programs, which encourage my son to learn more about the world around him. While we've travelled around the country these past few years, we've had terrific opportunities to discuss geography and learn about the various areas we visited. However, if you can't make the trip in person, this is the next best thing to being there.

Most of the reviews have been pretty positive regarding the product, though I was a little dismayed to see one writer respond:

Nice to almost see my house. But: last time I checked, this country was called the Netherlands and our neighbors in the south lived in Belgium. According to G, the names have been swapped ;)