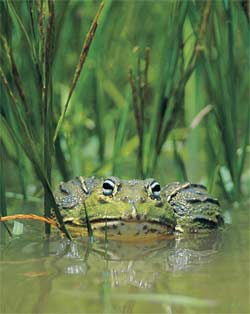 Analysts estimate that, each year in the U.S. alone, six million wild frogs are captured and destroyed for classroom dissection.

According to the Humane Society of the United States (HSUS), most animals used in dissection--including amphibians, birds, snakes, turtles, fish and invertebrates--are taken from the wild, even though many have been declining in population. Smithsonian Institution researchers who surveyed 14 major dissection supply catalogs found only one that offered "farm-raised" amphibians; none of the others verified their sources.

Researchers from the World Conservation Union reported in 2004 that a third of all amphibian species around the globe, including frogs, were threatened with extinction. Although habitat loss, pollution and climate changes are the primary causes, demand for dissection specimens only makes matters worse. Analysts estimate that as six million wild frogs are destroyed each year in the U.S. alone for dissection.

Taking frogs from the wild also increases insect populations, including those that carry disease. Frogs eat more than their weight in bugs every day. Farmers the world over have long relied on frogs to keep crops pest-free, but a lack of frogs in recent years has led many farmers to switch to pesticides. Concerns about this prompted India to ban frog sales in 1987. India had been earning $10 million yearly on frog exports, but was spending $100 million importing insecticides, according to the group Mercy for Animals.

The use of formaldehyde in preserving animal specimens is also a concern. Classified by the U.S. Environmental Protection Agency as a "hazardous air pollutant, water pollutant and waste constituent," formaldehyde can cause nausea, headaches and breathing difficulties in people, and has been linked to cancer in animal studies. Teachers and students involved in frequent dissections are exposed to it regularly. Further, schools discard millions of formaldehyde-laden classroom specimens each year, raising questions about its effects on the larger ecosystem as well.

Animal advocacy groups and some educators also question dissection on both practical and ethical grounds. While it is intended to interest students in science, they say, it may be having an opposite affect while also encouraging cruelty to animals outside class. According to the Physicians Committee for Responsible Medicine (PCRM), a 1997 study of seventh graders found that fetal pig dissections fostered callousness toward animals and dissuaded students from pursuing science careers. PCRM also cites surveys where as many as 90 percent of students said they should be able to opt out of dissection.

A number of computer-based teaching tools now on the market provide alternatives to live animal dissection. Digital Frog International's award-winning "Digital Frog 2" allows a student to "dissect" a computer-generated frog with a digital scalpel. The non-profit TeachKind provides a comprehensive online listing of such resources. Nine U.S. states--Florida, California, Pennsylvania, New York, Rhode Island, Illinois, Virginia, Oregon and New Jersey--now have laws that allow students to beg out of cutting animals and to use such alternatives. Other states have implemented policies that serve a similar purpose.