My late husband, David, was of Hungarian and Lithuanian descent, his grandmother had given him her treasured Hungarian cookbook, of family recipes. While the cookbook was indeed a real honest to goodness cookbook, complete with recipes, apparently Hungarian women are very protective of their family recipes. It was a long running family joke from then on. Here's how it went...

The Hungarian Ladies Cookbook was compiled by the ladies church group as a fund raising project and each woman was asked to submit her favorite Hungarian recipe, for inclusion in the book. Each woman, not wanting to give up her cooking advantage or the secret to her unique ethnic dish, slightly altered these otherwise wonderful recipes. Some of the contributors even went so far as to omit key ingredients to prevent the authors recipe from being duplicated exactly. The results were often disastrous. 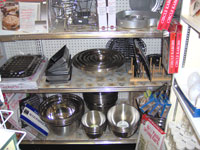 Our family favorite was a Hungarian dish called Chicken Paprikash. About every other month David would mix and prepare this dish from memory because his grandmother was no longer with us and the recipe in the cookbook he had been given was useless. I found out the hard way once, when I attempted to surprise him by making the dish for him, using his little cookbook.

After his passing, I had often craved this luscious dish and was at a loss to prepare it. Not only did I no longer have his Spaetzle Maker (a device, which resembles a cheese grater, used to make tiny noodles from a batter) but I didn't have a clue how to make it. A laborious search on the internet finally turned up a recipe that I felt was close to the original, which I was willing to attempt. Now to tackle the problem of finding an honest to goodness Spaetzle Maker.

Homemade Spaetzle Noodles With a Spoon?

I began searching in all the normal places, I turned our town upside-down, searching every store that might have even a remote chance of having one, all to no avail. I even inquired with my son, who was very helpful. He informed me that he makes those little tiny noodles with a spoon. Thanks, but no thanks. I wanted the real deal and I wasn't settling for less. I just couldn't imagine making all those little dumplings with a spoon.

Did you know you can buy dried spaetzle noodles in the grocery store? I had no idea. I wasn't adventurous enough to try them either. Please let me know if you have tried them and how they taste.

One bright day traveling down Highway 49, on the way back home to Citrus Heights after a visit with my father-in-law in the mountains, we passed a tiny store, in Jackson, CA called, "The Biggest Little Kitchen Store".

I screamed to my husband to stop. Surely they would at least know what a Spaetzel Maker was, which is more than I can say for most of the stores I'd tried. I had to at least try.

We started to go in and I told Shawn, I don't think they are open. The store was all dark inside but the man behind the counter assured me they were open and handed me a flashlight, while explaining they were in the middle of a power outage.

We thanked him for the flashlight and began exploring. The store was very tiny, fortunately they've since moved across the street into a much larger building, though it's still jam-packed with everything one could possibly need to cook with; from canning supplies to juicers and strainers. It was a cooks dream come true. I thought I'd died and gone to kitchen heaven.

The Biggest Little Kitchen Store had an entire section of copper pots, pans, molds and various other copper cookware. It was a sight to behold. I also was impressed with the fact that unlike many of the chain stores of today, they actually carried a large selection of quality American made products, a definite bonus in my book. Their staff knows their products and are very helpful in locating items or making suggestions. (This was a breath of fresh air compared with employees at the large box stores.)

When we weren't able to turn up the item we were searching for, we asked the clerk for assistance and sure enough, he actually knew what a Spaetzle Maker was and he was positive they had one in stock. After a brief search and a few good laughs we were on our way with our brand new Spaetzel Maker made by VillaWare in Cleveland, OH in hand. It's not available now from Amazon, but mine has held up very well over the years.

Though that chance stop at The Biggest Little Kitchen Store was several years ago, we now purposely route our trips to the valley down highway 49, just so we can stop in to pick up a new item or two. A couple more trips to the valley and I should have my knife collection complete. I currently have five Forschner knives made by the Swiss company Victorinox, they are awesome knives and sharpen up nicely with my new knife sharpener, purchased on my last trip. The Ultimate Edge, a professional Diamond Sharpening Steel oval made in Santa Monica, CA, is so easy to use, I can now sharpen my own knives — but don't tell my husband.

I was totally impressed when they had the hard-to-find, burrito size tortilla warmer (no longer available on the website but several very nice selections can be found in their store). The small sizes are everywhere but the large size tortilla warmers are next to impossible to find locally. Not only did they have several in stock but they were handmade ceramic pieces, made to last a lifetime and were eye appealing as well, not like the cheap styrofoam variations that are not enviromentally friendly.

Tuesday, we redirected our route from Twain Harte, to Sacramento so I could stop and pick up my new knife sharpener, (did I mention that I love my knives?) and had the delightful pleasure of finally meeting the owner, Janie Williams. I had no idea that the store had been in this same location for over 30 years. We had a nice chat and I was able to express my gratitude to her for coming to my rescue when I was desperately trying to locate a Spaetzle Maker.

These days I make Chicken Paprikash on a regular basis, my spaetzle noodles are tender and succulent, thanks to my treasured Spaetzle Maker. I was fortunate in that the one I purchased even came with an easy to make recipe, which I still use to this day. My Chicken Paprikash recipe isn't the original but I'd like to think I've improved upon it just a tad.

Don't make the same mistake I did and wait until you are desperate before you stop in for a visit. You'll be glad you did. They now carry a cheaper version of the Spaetzle Maker that I purchased. I would not waste my money on a plastic one. You'll thank me later. However, I do recommend that you purchase the best Spaetzle maker that you can afford. I wish they would make a nice one out of stainless steel with a handle on the plugger. I have't seen one yet. The original one I had was made to last, as always, you get what you pay for.

Makes a great Christmas Gift too!
Get a Spaetzle Maker today.

The Biggest Little Kitchen Store in the Motherlode