Create a memorable Thanksgiving or Christmas meal for friends and family.

While out grocery shopping a couple of weeks ago I was picking up some crab salad from our local store and noticed an item in the seafood display I was not familiar with — Langostino Meat. It appeared to be small melon-ball sized pieces of lobster.

I checked with the seafood clerk and found that it was sold as a cheaper alternative to lobster. We normally pay around $30.00 a pound for lobster tails and at $12.99 a pound, the Langostino Meat was definitely a bargain. The best part was, it was sold in bite-sized morsels and was already shelled.

Thinking it was too good to be true, we picked up half a pound. I prepared the Langostino in a mixture of butter and garlic, allowing it to cook for a couple of minutes, then served it with vegetables. It was absolutely delicious. While it didn't taste exactly like lobster, it was so close; few people would ever be able to tell the difference. The tender Langostino Meat would be succulent served in lobster bisque or seafood chowder.

Our family enjoyed them so much that we went back and bought 2 pounds the following week. I plan to serve them over the holidays in my seafood chowder.

Still not quite understanding exactly what a Langostino is, I started searching online, only to find that there is no consensus as to exactly what they are. Even the FDA has two classifications for them. 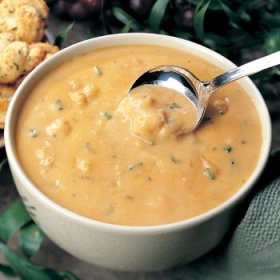 With the newfound popularity of langostino meat, lobster loving restaurant goers will want to be cautious when ordering, to be sure they get what they pay for. When you order a dish made with lobster and you are paying the price for lobster, you don't want to be served a substitute.

On the other hand what a wonderful alternative to those boring holiday dishes that are served year after year. Now you can serve delicious lobster dishes at less than half the cost, which means you won't have to skimp on the meat.

This delicious Langostino Bisque recipe is a wonderful lobster alternative, your guests will love, no matter what name you call it by.

In a small bowl, combine langostino meat and sherry; set aside.

Another delicious recipe to try with Langostino is this Mock Lobster Newburg recipe. 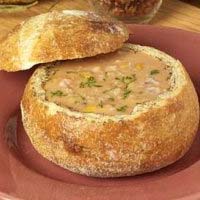 This Langostino Newburg is made with half-and-half, sherry, cooked langostino meat, and butter.

In a medium saucepan over low heat, heat langostino in the butter for 2 to 3 minutes. Add salt, cayenne pepper, and sherry. Mix beaten egg yolks with the half-and-half and add to langostino meat. Cook, stirring constantly, until Langostino Newburg is thickened and heated through, but do not bring to a boil.

Where to Buy Langostino Meat

I have been searching for months for information on langostino lobster bites and found your article.

Can you please advise where these can be purchased online?

Our local Savemart carries Langostino Meat in the Seafood Department most of the year. There does seem to be a few dry months when they are not available. However, since they come in frozen, they do carry them most of the time. If you don't see them, do ask your Seafood Manager to order some. You can search for your local Savemart at the link below. You might also consider asking at your local market, or try ordering them from Seatech Corporation or Stavis Seafoods, if you don't have a Savemart in your area.