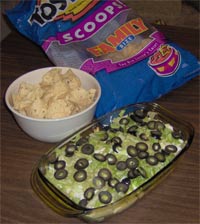 My husband is a huge refried bean fan. He will eat just about anything made with them. This recipe has evolved over the years from a recipe that I have for Seven-Layer Dip. In truth I never really followed the recipe but used it instead as a guide or starting point.

I have pared this recipe back to make enough Five Cheese Layer Dip to fill a small shallow glass pan, just enough for two (but normally the hubby can finish off the entire pan in one sitting, if I let him. It's very easy to convert this recipe to fill a 9" x 13" pan. 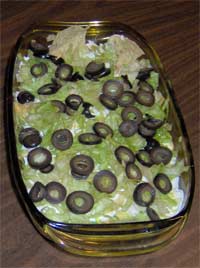 Layer refried beans in the bottom of a small metal or glass pan. Layer remaining ingredients in the order shown above. Chill until ready to serve.

No one layer of the Five Cheese Layer Dip should be very thick by itself. Creating thin layers of each ingredient creates a mixture of flavors and textures that will delight most any palate.

Serve Five Cheese Layer Dip as an appetizer with your favorite cracker or chips. I like to serve the dip with Tostitos brand tortilla chips - especially Scoops!