Parents are spreading the word about FluMist, the nasal flu vaccine, manufactured by MedImmune, in attempts to avoid contact with the vaccine.

There are many reasons parents are up in arms about the FluMist vaccine. FluMist contains live (attenuated) influenza viruses that replicate in the nasopharynx of the vaccinated recipient. Until just recently, only the inactivated influenza vaccine administered by injection was available for use in the United States.

Common side-effects noted by the manufacturer include "cough, runny nose/nasal congestion, irritability, headaches, chills, muscle aches and fevers above 100° F." These are symptoms nearly identical to the flu, an affliction the vaccine is designed to prevent.

Currently the nasal spray vaccine is approved only for healthy people ages 2 to 49, according to Dr. Jay Butler, an official with the Centers for Disease Control and Prevention. [Read More...]

The main cause for concern is FluMist's most prevalent side-effect, a runny nose. Documented studies show that the live viruses can be shed and potentially spread into the community from recipients for up to 21 days.

Additional, nasal secretions are a major concern, which can disperse the virus through the act of sneezing. The normal response whenever an irritant enters the nasal passages is to sneeze. Making it even more probable that businesses distributing the virus would be heavily contaminated from the forcefulness of the resulting sneeze.

Parents are spreading the word that coming into contact with those who are vaccinated via this new method run the risk of direct exposure or exposure to other contaminated items, such as shopping carts. 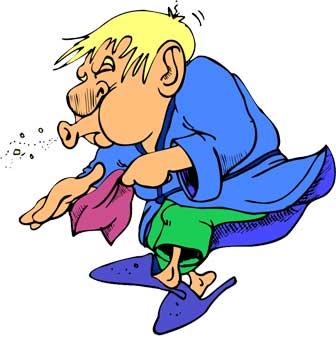 "Getting the flu shot" makes it seem like one jab and you're protected, but that's not actually the case. The seasonal flu vaccine requires "at least two shots" for many patients, and neither the inactivated influenza vaccine nor the LAIV nasal spray (FluMist) protect people from the H1N1 virus, a.k.a. Swine Flu.

A vaccine for H1N1 is still being developed (doses are expected to become available in October), and officials do not know whether it'll require one or two doses to be effective. The National Institutes of Health says that one dose of the H1N1 virus is fine for older kids — the protection will kick in eight to 10 days after the shot, just as it does for adults — but younger children "almost certainly will need two" spaced three weeks apart. -- LMA)

The FluMist website warns users that, "due to the possible transmission of vaccine virus, FluMist recipients should avoid being in close (for example, within the same household) contact with immunocompromised individuals for 3 weeks following vaccination."

The release of live viruses throughout the community may prove to be a significant risk to anyone who has a weakened immune system.

Information on the website goes on to warn that, "there are risks associated with all vaccines, including FluMist. FluMist does not protect 100% of individuals vaccinated."

The media push has been tremendous, those targeted fall into the five to forty-nine age group who typically have the lowest numbers vaccinated against the flu.

According to information presented at the May 2003 National Influenza Summit, approximately 85 percent of Americans between the ages of twenty and fifty go unvaccinated, and nearly 66 percent between the ages of fifty and sixty-four do not receive the flu vaccine.

Even with this huge push, sales are falling far below projected numbers.

Those seeking to avoid businesses that dispense the vaccine can use a new tool FluMist Finder intended to help those wishing to purchase this new item.

This author has received reports that despite recent media claims certain Wal-Mart stores are participating in providing this product. Shoppers of Wal-Mart would do well to call and inquire ahead of any planned shopping trip.

Parents are encouraged to do their homework before having children inoculated with FluMist.