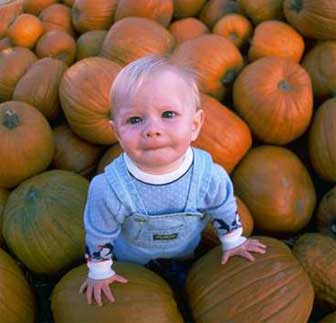 It has been 2-weeks today since I started my son on this formula. I am using pasteurized goats milk (Meyenberg) instead of raw, as raw is not an option for me.

I found out pretty quickly why you adjusted the flax seed oil daily. 1-tablespoon seems to be too much for my son to handle. I found that 1½ teaspoons to 2-teaspoon fulls are perfect for him.

I had to give up the wheat germ after 3-days. My son developed eczema around 3-months of age, (he is 6½ months old now). He has two rather large patches on his forehead, which I will not use steroid cream on so they have not went away. Well, on the third day of using the wheat germ he developed two more small patches. The only thing that changed was the formula. I immediately removed the wheat germ from the formula and those two small patches started to go away within days. Other than the wheat germ I use all of the ingredients.

Now, have I noticed a change in my son? Yes, two very noticeable changes.

I was hoping the change would help his spitting up, as he spits up a lot, but that didn't happen. He still spits up, and now it really stinks, but it's worth it, plus the goats milk formula doesn't stain his clothes! That's a plus!

Flax Seed Oil is completely safe for everyday use. It is not recommended that flax seed oil be heated to a temperature over 325 degrees but works well for lower temperatures and baking.

I did tell my pediatrician about my change. I made it clear to her that since using it he has BM's the way he should and the eczema seems to be clearing up. She was surprised, to say the least, but she didn't give me any trouble.

He doesn't seem to have any problems with the formula. He drinks it right up. In the last 2-weeks he has also become so much more active. He's started rolling everywhere and playing so much more than he used to. Is it the formula or just his age? I'm not sure, but I think he does feel better since starting it. He also seems to be putting on some weight. He just had his 6-month Dr. visit and he is in the 30th percentile in weight. He was only on the formula for 1-week at that point. I really think he will put on a lot more weight by the time his 9-month visit rolls around.

I can't tell you how happy I am to have found this recipe. I thank you so much for putting it out there. If not for this he would still be on some store bought stuff and I would still be beating myself up over it.

Thank you so much for the update. I experienced much of the same thing you are experiencing with my grandson. I am concerned about his spitting up though. My grandson stopped spitting up entirely when I switched to this formula. Keep an eye on that and let me know if the situation resolves itself. If not, maybe the formula needs a little tweeking for him.

If I didn't recommend it before, please keep a daily journal or diary of anything noticable, it could help you figure things out. Give it another week or so, then you might want to try removing one thing at a time to see if something you are giving him is the cause of his spitting up. Obviously if he is spitting up his food, he's not getting the full benefit from it.

Congrats!
Give the baby a hug from me.

Yes, at your recommendation I have been keeping a journal.

Honestly, everything is going great except the spit up. The first day we used the formula there was only a couple small incidents with spit up, but since then it's been quite a bit every day. It's usually when he is a.) bouncing or kicking a lot when playing or b.) laying on his belly. I never put him down to do either until at least 1-hour after he eats but it really doesn't seem to help.

If he's upright and kind of still it's pretty much under control. I wish there was something I could do. I just don't know what. He's been spitting up since about 1-month-old. It doesn't seem right to me but the doctor, and everything I read, says not to worry about it unless he's in pain or not gaining weight.

I do notice as of late a little comes up in his throat and he has to cough to clear it and swallows it again. It does scare me a bit when he does that because it seems like he is choking, but I don't think he is. This usually happens when he is laying on his back.

One more thing I forgot to mention. I feared that switching to goat's milk would bring back the congestion and stuffy sinuses he had in month one when he was on a cows milk formula. I am happy to report that did not happen. His sinuses are still as clear as a bell! I love that!!

I will update you in a couple of weeks and let you know if the spit up is continuing.