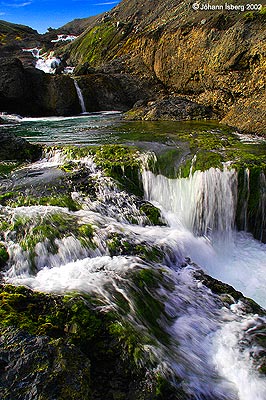 An Interview with Extreme Engineering Producer

I sat watching "Extreme Engineering: Iceland Tunnels" on the Discovery Channel several nights ago and was totally enthralled by the program. The scenery was magnificent, camera angles were incredible. I found the program intriguing and informative.

Extreme Engineering guided viewers through the struggles of working in an unforgiving environment, facing not only the brutal weather but the challenges and risks of working against the elements of nature. Iceland is an unusual country, with thousands of acres of glaciers, dark sands and lava, covering nearly 12 percent of the entire landmass.

Hundreds of feet below the Eastern Highlands - a vast ice plateau, 200 miles northeast of Reykjavik, Iceland and just 100 miles south of the Arctic Circle - a determined group of engineers and diggers have taken on the task of a lifetime: They're trying to carve more than 45 miles of connected tunnels through solid rock. It's all part of an audacious plan by the Icelandic government to turn ice into electricity.

(Special thanks to Andri Snær Magnason
for the submission of the above links.)

The plan is to reroute glacier run-off through manmade tunnels, diverting the torrential spring waters from their current path, into a hydro-electric plant, which will be built after the diversion project has been completed.

It is certainly an ambitious program not to mention a costly one. This benign program was carefully focused on the work at hand, covering the trials of a multi-national workforce, where language barriers abound and communication is difficult at best.

After the program ended, I was left with more questions than answers. There were such obvious omissions in the story-line that I was forced to seek out more information. For starters, it was glaringly obvious that this was an extremely expensive project. Who was footing the bill and why?

Producing hydro-electricity was a laudable idea and anyone in California knows the need for more power producing plants. Hydro-electric power is one of the cleanest forms of a renewable energy source, the Icelandic government should be recognized for their dedication to clean fuel. Yes?

Even so, a project of this magnitude is a costly proposition, which would take many years to recoup the investment costs, making it likely there were other underlying motives.

I discovered that Alcoa, an American corporation that produces aluminum is footing a large portion of the bill behind this hydropower plant.

An article which ran in the Orion entitled, "The Icelandic Rift" had this to say:

Alcoa, the foreign investor for whom the wilderness would be sacrificed, is the world's largest aluminum company. The aluminum smelter it plans to build, with an annual capacity of 322,000 tons, would be the largest in Iceland. A January 2003 Alcoa press release described the construction of the smelter as "the most extensive single investment in the history of Iceland." Alcoa's investment will come to $1.1 billion. Then there's Iceland's $3 billion investment in building the hydropower project, which The New York Times described as "an undertaking so big it equals nearly a third of the country's gross domestic product."

The plant is scheduled to be operational in 2007 and will cost Alcoa approximately $1.1 billion over the next 4 years.

In Iceland, work has already begun on a colossal $1bn dam which, when it opens in 2007, will cover a highland wilderness - and all to drive one US smelter. Environmentalists are furious, but the government appears determined to push through the project, whatever the cost. Susan De Muth investigates

According to: Behind the Shining: Aluminum's Dark Side

Smelters aggregate around sources of cheap energy, because 45% of the cost of aluminum smelting is electricity. These factories have concentrated around the world's vastest sources of energy: massive power-producing dams, rich seams of coal, gas fields in the Middle East, and geothermal fields in Iceland.

I'm no expert on Iceland but I am aware that much of the seafood we eat comes from this region and I worry about the effects a huge aluminum smelter will have on the health of the aquatic life in the area and beyond. No one knows what the effect this massive diversion project will have on the pristine ecosystem.

I placed a call to the Discovery Channel and completed several online searches in attempts to find out who produced the program but that information was not available. I'm curious to find out who actually commissioned this program and why important details were omitted.

A similar project was proposed in Chili and was met with great opposition by a large number of Chilean and international organizations who are concerned about the devastating impacts this project will have on the pristine Chilean ecosystem.

The proposed Chilian smelter would produce approximately 1.5 million tonnes of gaseous and solid waste per year. Solid waste products would contain fluorides, cyanide, and other toxic elements such as arsenic.

It is clear that the Icelandic smelter will impact the local ecosystem but just how much impact will be felt on the rest of the world, remains to be seen. Iceland is a major exporter of fish and various other seafood, plant run-off and toxic polutants will negatively impact the food supplies around the world.

In the absence of other natural resources (except for abundant geothermal power), the Icelandic economy depends heavily on the fishing industry, which provides 70% of export earnings and employs 12% of the work force. Icelands economy remains sensitive to declining fish stocks as well as to fluctuations in world prices for its main exports: fish and fish products.

Fully 22.5% of Iceland's population are children under the age of 15, a significant portion of the population. Research has shown that children are especially susceptible to toxic environmental pollutants, partially because they are less careful than a normal adult would be and because their bodies are still growing.

Exactly what impact the poisoning of Icelands fishing waters will have on their own economy remains to be seen.

While it is truly incredible that engineers can accomplish such mind-boggling feats, it doesn't necessarily mean that they should. Nature is a powerful force and when big business starts behaving like they are in control of the elements, upsetting the natural balance of this force, they could be setting themselves up for more problems than they bargained for.

I hope the government of Iceland knows what it's doing and takes proper steps to protect the health of its citizens and the magnificient environment laying just outside their doors, instead of turning a blind eye to corporate greed.

An Interview with Extreme Engineering Producer

Shortly after this article was posted and much to my delight, I received an e-mail from Mr. Joel Olicker, the films producer.

"I am the executive producer of the Iceland Tunnels show for Discovery Channel. The program was produced by my company, "Powderhouse Productions" located in the Boston, MA area. We produce a series called "Extreme Engineering" and this was one of the programs we produced this season for that series."

How much time did you and your film crews spend in Iceland during the actual filming?

Our crew, consisting of a producer, co-producer, cameraman and soundman. We spent a total of three weeks filming on location. They did an initial two week trip, followed up by a one week trip some weeks later. A few weeks prior to any filming, the producers visited the site to scout locations, do field research, etc.

Was the Icelandic government and/or Alcoa involved in the project and were you prevented from disclosing controversial facts of the project?

The government and Alcoa were of course involved in the electrification project. By the way, we did mention that fact in the program, as well as the estimated cost of the project. Neither the government nor Alcoa had any control over the content of our story.

Your program made no mention of Alcoa or the fact that they are providing a large amount of the funding, who made that decision? And why?

In fact we explicitly state the fact (in the first few minutes of the program) that the project is a joint venture between Alcoa and the Icelandic government. And we state the estimated costs of the project.

Was there a governmental analysis on the effects of such a large diversion program on the ecosystem?

I do not know. Our series focuses on the logistical and the personal challenges of large engineering projects. We do not tend to focus on ecological issues and controversies.

Of the waste that will be produced, how do they intend to dispose of it?

I do not know.

How long was this project in the planning stages and to what extent was your companies involvment?

Our film took about seven months from start to finish.

I am concerned because 70% of Icelands economy comes from the fishing industry. Can you provide any other details, which our readers may find interesting?

This project is an attempt to diversify the economy. The hope for the project is that it will spur economic growth in an area hard hit by the loss of jobs in the fishing industry.

Are the people of Iceland informed regarding this project and are they behind it?

There has been a great deal written about the project in Iceland. There has been some controversy, as well, but I do not know the details.

After Mr. Olicker responded that his company had mentioned who was funding the project, I recalled that I had indeed missed the first couple of minutes of the program. My apologies for providing mis-information and thank you to Mr. Olicker for setting the record straight.

I'd like to thank Joel Olicker for agreeing to this interview. I look forward to watching more "Extreme Engineering" feats.

Some small additions to your article:

There are already 2 aluminium smelters operating in Iceland (the first one since the 1970's) with no adverse effects on the environment (one of the cleanest environments on the planet). Fishing accounts for approximately 50-60% of Iceland's export earnings but the economy is not just export, a lot of goods are produced for the local market so the fishing accounts for less than 30% of the total economy. The fishing employs about 6% of the work force.