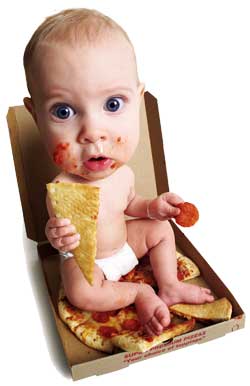 Giving babies nutritious food is not only good for their health, but it will also help establish positive eating habits, unlike the one demonstrated here.

Dear EarthTalk:
I want to give my baby fresh, organic food but I don't have the time to make her special meals. What options are out there?
-- Marie L., via e-mail

Babies deserve the best possible start in life, so giving them nutritious food is a must, not only for good health but also to establish positive eating habits as early as possible.

According to Consumers Union (CU), publisher of Consumer Reports magazine, commercial baby foods, many of which are made up of condensed fruits and vegetables, can contain high concentrations of pesticide residues. "A lot of these pesticides are toxic to the brain," says Philip Landrigan, a professor of pediatrics and preventative medicine at Mount Sinai School of Medicine in New York City. Citing studies that have linked smaller head circumference and reduced intelligence in babies to in utero exposure to pesticides consumed by their mothers, Landrigan says it is best not to gamble when it comes to baby food.

If you're not already serving organic baby food, CU urges making the switch as soon as possible. A 2005 study ordered by the U.S. Environmental Protection Agency measured pesticide levels in the urine of 23 children in Washington State before and after a switch to an organic diet. After five straight days on the diet, pesticide measures fell to undetectable levels and remained so until the conventional diets resumed. The study concluded: "An organic diet provides a dramatic and immediate protective effect" against pesticide exposure.

Fortunately for concerned parents the organic food industry is growing rapidly, and one result is the availability of a wide selection of organic baby foods in both natural food stores and mainstream supermarkets. Some leading jar- and box-based choices come from Gerber, Earth's Best, Homemade Baby and others. And frozen meals from the likes of Happy Baby, Plum Organics, The Bobo Garden and other relative upstarts mix good flavor and fresh healthy ingredients with convenience. Using the power of cold temperatures to keep their foods fresh allows these companies to avoid the use of traditional preservatives.

Happy Baby's frozen meals come in individual cubes in flavors like "Baby Dahl and Mama Grain," an organic mixture of bananas, black beans and quinoa (pronounced KEEN-wah). Quinoa is a high-protein whole grain that is considered a complete protein because it contains all eight essential amino acids.

For parents inclined toward cooking instead of opening jars or microwaving, making baby food out of fresh organic ingredients does not have to be complicated or time-consuming. Fresh Baby sells cooking kits, cookbooks and food trays to help parents concoct and serve the freshest and healthiest baby food possible right from their own kitchens.