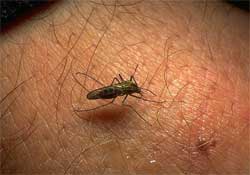 Blowing the Whistle on West Nile

I'm reminded of the 1950's...TV newscasts showing clouds of DDT sprayed on a clueless public, compromising their health and contaminating the environment for decades to come, as Rachel Carson writes "Silent Spring."

But the time is now, other toxic pesticides have joined the ranks in our wayward war against mosquitoes, and the Rachels of today are drowned out by a media rushing to sound the alarm, rather than report the news.

And the news is - pesticides pose a much greater health hazard than the West Nile virus.

Pesticides pose a much greater health hazard than the West Nile virus.

DEET, Anvil, and other toxic pesticides are aggressively promoted to protect the public from a mosquito bite that appears to be, statistically, less dangerous than a dog bite or bee sting. And the CDC seems to agree. On its website it says, "Human illness from West Nile virus is rare, even in areas where the virus has been reported. The chance that any one person is going to become ill from a mosquito bite is low."

Since 1999 only a handful of deaths per year have been associated with West Nile, even though the virus has been found in 33 states.

The fact that this "health crisis" has been exaggerated, and that chemical spraying is usually the least effective yet most toxic way to control mosquitoes, has deterred some state officials, but not others.

Pesticides Cause More Harm Than Good

The New York State Health Department backed away from recommending wholesale spraying after finding that more people got sick from the pesticides than from the virus. However, Louisiana has just asked for $17 million in federal aid, and Mississippi is following suit. There's no word yet on how the money is to be allocated, but rest assured the pesticide companies stand to benefit.

Meanwhile, some citizen groups are taking matters into their own hands. The No Spray Coalition is suing New York City to stop pesticide spraying in their neighborhoods.

There's a good deal of information on government and other websites about the toxic effects of pesticides, but a comprehensive picture of the specific pesticides and issues involved in the West Nile campaign is well laid out in a report called "Overkill: Why Pesticide Spraying for West Nile Virus May Cause More Harm Than Good" by the Maine Environmental Policy Institute (MEPI) and the Toxics Action Center.

In short, they report that these pesticides offer a toxic legacy: short- and long-term respiratory problems, immune and nervous system disruption, cancer, and reproductive and learning disorders. That covers just about everything you'd never want to get.

The "Overkill" report also emphasizes the association between outdoor pesticide sprays and neurological damage, stating, "A report of pesticides and childhood brain cancers published in Environmental Health Perspectives (a publication of the National Institutes of Health) revealed a strong relationship between brain cancers and pyrethroids used to kill fleas and ticks." Anvil, a pyrethroid, is a popular pesticide used by state agencies to control mosquitoes.

It appears the cure can cause the disease. That would be ironic, if it weren't so tragic.

The use of DEET in mosquito repellents is extremely troubling. DEET has been associated with seizures and several cases of toxic encephalopathy (encephalitis) in children, including three deaths, according to the Extension Toxicology Network at Cornell University.

The battle against West Nile is supposed to prevent a virus that can cause encephalitis. It appears the cure can cause the disease. That would be ironic, if it weren't so tragic.

Dr. Mohamed Abou-Donia, a research scientist at Duke University Medical Center, whose studies have established a link between DEET and neurological damage in animals, warns parents in a recent Environmental News Service article, "Never use insect repellents on infants, and be wary of using them on children in general.

Never combine insecticides with each other or use them with other medications. Even so simple a drug as an antihistamine could interact with DEET to cause toxic side effects. Don't spray your yard for bugs and then take medications. Until we have more data on potential interactions in humans, safe is better than sorry."

Meanwhile, state and federal agencies, including the Environmental Protection Agency (EPA) and the Centers for Disease Control (CDC), are encouraging the public to use mosquito repellents containing DEET. Although the CDC warns parents to avoid applying repellent on children less than 2 years old, the EPA and other state agencies are not giving that caution.

The EPA instead advises, "Do not allow children to handle the products, and do not apply to children's hands. When using on children, apply to your own hands and then put it on the child."

Have these people ever met a child? Children touch everything and everybody, including themselves. And then they put their pudgy little fingers directly into their mouths.

While the battle plan's objective is to target the mosquitoes that carry West Nile, the strikes won't be 'precision' and the collateral damage could be vast. Pesticides and larvicides can impact fish, insects, animals, and humans. And although the public has been told to lather up with DEET, spray pesticides, and eliminate standing water, little has been said about using select plants, birds, bugs, fish, and amphibians - gifts of nature that help control mosquitoes.

It seems we're traveling in a deadly circle. Spraying for West Nile, while we're gassing ourselves. Falling for a health scare, when the real scare is the alleged cure. And the real cure can be found in the natural world we're attacking.

Welcome to the 1950's. Rachel must be rolling in her grave.

Spraying for mosquitoes is a major problem across the country as the panic about the West Nile virus continues to escalate. Pyrethrum insecticides, a type of insecticide being used to combat the virus, have been shown to cause birth defects in animal studies (Abstract).

The major tragedy of this West Nile virus panic will ultimately all the damage that is being done to people and their young and unborn children through exposure to these toxic chemicals.

©Copyright 2005 Dr. Joseph Mercola. All Rights Reserved. Special thanks to Dr. Mercola for allowing us the use of this article, which originally ran on August 31, 2002.