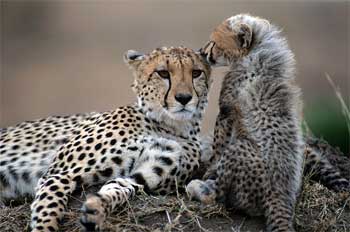 A cheetah mother and her cub on the Masai Mara National Reserve in Kenya.
Image Compliments of Getty Images

Due to its plight in recent decades, the cheetah, which can reach speeds of 70 miles per hour, is considered one of the world's most endangered species by the Convention of International Trade in Endangered Species (CITES).

A hundred years ago some 100,000 wild cheetahs inhabited 44 or more countries throughout Africa and Asia. According to the Cheetah Conservation Fund (CCF), a Namibia-based non-profit organization, today the species exists in only two dozen of those countries — including areas of North Africa, the Sahel, East Africa and southern Africa — with worldwide population numbers now between 12,000 and 15,000 individuals living in small groups.

In addition, about 150-200 of the fast cats live in the wild in Iran (where they are known as the Asiatic Cheetah), their forebears having been brought in from Africa in the early 20th century.

The chief threats to the cheetah's existence are loss of habitat, poaching and hunting (their hide and trophies can command top dollar), and getting shot by livestock farmers. Decline of gazelles, wildebeests, impalas and other preferred prey species (also due to hunting and habitat loss) is a factor, too.

According to CCF, throughout Africa cheetah numbers are dwindling even within protected wildlife reserves due to increased competition from other larger predators like lions and hyenas. As a result, most protected areas are unable to maintain viable cheetah populations; so individual cats tend to fan out beyond wildlife reserves, placing them in greater danger of conflict with humans.

Those cheetahs that do survive in the wild come from a smaller, less diverse gene pool, leaving them susceptible to disease and predation in their own right. Furthermore, captive breeding has proven tricky, and wildlife biologists are not optimistic that such efforts can have a measurable positive impact on the cheetah's future.

Cheetahs have lean bodies, long legs, a large heart and expansive lungs. And with these features come additional speed; perhaps this is why the cheetah is often referred to as the "greyhound" of the cats. In fact, some say a cheetah looks like a "dog with a cat's head." But with weaker jaws and smaller teeth than other large predators, cheetahs have difficulty protecting their kills, let alone their own cubs. This has meant that population numbers for wild cheetahs are falling faster than for other big cats.

The cheetah's future may look dim, but conservationists have been working to lessen the decline in some areas. For instance, CCF began educating livestock farmers around Namibia in the early 1990s about how to prevent cheetahs from preying on their livestock without resorting to the rifle.

As a result of these education efforts, along with stronger enforcement of endangered species and anti-poaching laws, cheetah populations in that country stabilized — now some 2,500-3,000 cheetahs make their home in Namibia — after having fallen to half that the previous decade. Clearly more such efforts are needed.