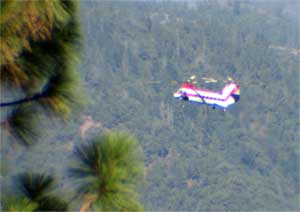 How safe are fire retardants used in forest fires?

Dear EarthTalk:
How safe are the fire retardants that are used to quell forest fires across the American West?

So-called long-term fire retardants—those usually dropped from airplanes over forest fires—are comprised of water mixed with a slurry of chemicals, thickeners and corrosion inhibitors designed to prevent plants on the ground from igniting, keep the ingredients from separating and dispersing during targeted drops, and ensure that the harsh chemicals on board the plane don't endanger the flight's safety.

Firefighters sometimes add iron oxide to make the fire retardant turn red when applied so they can see where they have already covered. Ammonium phosphate and ammonium sulfate, known for their use as agricultural fertilizers, are also often added to provide nutrients to help the forest regenerate after a burn.

In recent years, where global warming and droughts have exacerbated forest fires across the American West, federal and state firefighting agencies have upped their cumulative annual use of long-term fire retardants to some 20+ million gallons a year spread across tens of thousands of individual fly-overs.

While such chemicals have been valuable in minimizing the damage of forest fires, their use comes with a price. The nitrogen in ammonium phosphate and ammonium sulfate can wreak terrible havoc on aquatic ecosystems, creating algae blooms that kill fish by choking out their oxygen. A 1998 study by the U.S. Geological Survey's Northern Prairie Wildlife Research Center, found long-term fire retardants to be "very toxic to aquatic organisms including algae, aquatic invertebrates and fish." The study also said that fire-fighting chemicals "could cause substantial fish kills depending on the stream size and flow rate."

These chemicals have also been shown to affect some plants' reproductive capacities. One study found that spraying fire retardants in some cases decreased plant species diversity, as weedier species better adapted to make use of excess nitrogen in the soil tended to thrive while native species were not able to compete.

In 2000, the U.S. Forest Service issued guidelines for use of fire retardants by aerial fire fighting crews. While the focus of the document was fire control and safety, it encouraged pilots to avoid applying retardant within 300 feet of waterways or other sensitive areas. The Forest Service acknowledges the risk of using retardants, but believes that their use in moderation is a net gain; as fewer "ground troops" need to be sent in to risky situations while more property can be saved from the ravages of a fast-moving fire.

Fires are actually an essential part of forest ecology and many species of trees and plants thrive in part because of the natural occurrence of fires (sequoia trees, for example, depend upon the high temperatures of forest fires to pry open their cones so new seeds can spring forth and take root). The main reason that such catastrophic, news making fires occur in the first place is that humans have sprawled too closely to the forest edge. This has lead to forest management policies that suppress natural fires, causing large build-ups of tinder-like woody debris that eventually ignites and burns out of control.