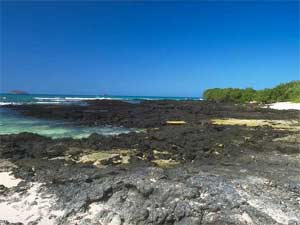 The Galápagos Islands | Can We Keep It?

College student Kelli Simkus explores the ecology and problems facing the Galápagos Islands, due to the introduction of non-native plant life, animals and the invasion of humans on this island paradise.

The Galápagos archipelago Islands are a group of volcanic islands that consist of 13 main islands and six much smaller islands. There are several rocks and islets in this region. The Galápagos Islands are south of Mexico, and 600 miles west of Ecuador on the Equator.

The uniqueness and beauty of these islands have brought humans to the islands for the last couple of centuries. Due to whalers, pirates, sealers, tourism and the weather, the Galápagos Islands have been placed on the World Heritage List for being in danger in 2007. These islands are in severe need of help if the marine species are going to continue to exist.

The Galápagos Islands are home to many forms of wildlife in the area. The Islands are divided into three distinct zones. The condition of the ecozone determines where the wildlife can be found. Each species is well suited to it's own ecozone.

The littoral zone; is an area that is a narrow stretch of arid lowland that can be found along the shoreline between high and low water levels. The plants found in this area are rooted, like the mangrove and common shrubs like slatbush. Beach morning glories grow along the coastal beaches. The morning glories help to stabilize the beach area and protect it from further erosion. (World Wildlife, 2001)

There is the arid zone, which is a region where evaporation exceeds precipitation. It is inland of the littoral zone and covers most land in the Galápagos ecoregion. There are many species of cactuses that inhabit the arid zone. 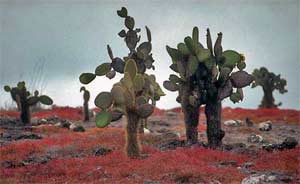 Finally, the third zone, the humid zone, is sometimes called the transition zone. The transition zone has arid to moist temperatures. These are areas on islands that reach elevations of 1,000 feet. Here you will find a combination of vegetation types and species.

There are over 560 native species of plants on the islands. These plants were found on the Galápagos Islands when the area was discovered. (Galápagos Conservation Trust, 2008) Some of these plants are found nowhere else in the world.

There are a couple plants that are dangerous to the Galápagos Islands. These plants were introduced to the islands and are invading the natural vegetation. Miconia robinsoniana is a green like bush that is found on Santa Cruz.

The Galápagos Islands is home to many marine and land animals such as... 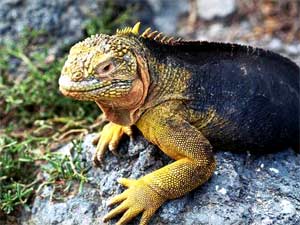 Like the plant life, there are many animals that are native to the Galápagos Islands, and there are animals that were introduced to the islands that are harmful to the native animals. Feral goats, cats and cattle were either brought accidentally or willingly to the islands by humans. Goats and cattle eat the natural vegetation that the indigenous animals of the Galápagos need to survive.