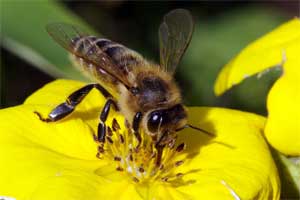 Dear EarthTalk:
Not long ago there were concerns about honey bees disappearing. Are the bees still disappearing, and if so do we know why and do we have a solution?

The topic of disappearing honey bees first cropped up in 2004 and by the spring of 2007 was all over the news. Thousands of commercial beekeepers across the U.S. and beyond were reporting in some cases that as many as two-thirds of their honey bees were flying away from their hives, never to return.

What made the problem — dubbed "Colony Collapse Disorder" (CCD) — so unusual is that most traumas to bee colonies leaves bees dead in or around their hives, not mysteriously gone altogether.

Strangely enough, there was no concrete evidence pointing to disease or predation or of mites that tend to attack bee hives. Some beekeepers reported that moths, animals and other bees were steering clear of the newly empty nests, leading to speculation that chemical contamination due to widespread use of pesticides might be to blame. But no smoking gun emerged and the mystery remains today.

According to the U.S. Department of Agriculture's Agricultural Research Service (ARS), which last year convened a multi-agency steering committee to assess the problem and find solutions, several factors could be combining to cause CCD. "Pesticides may be having unexpected negative effects on honey bees," reports ARS, adding that as yet unknown parasites, pathogens or viruses could also be wreaking havoc on bee colonies.

Studies have also indicated that poor management of populations of commercial honey bees — including inadequate diet and long distance transportation — may play a role.

In one study, researchers from Columbia University isolated the presence of a virus — the so-called Israeli Acute Paralysis Virus — in upwards of 96 percent of the hives studied that were affected by CCD.

Other studies point to widespread use of Imidacloprid, a common grub — control chemical used on lawns and farms and which has already been banned in France due to its alleged effect on bees. But finding a single cause of CCD seems unlikely, and ARS researchers point to the possibility of "a perfect storm of existing stresses" weakening colonies to the point of collapse: "Stress...compromises the immune system of bees...and may disrupt their social system, making colonies more susceptible to disease." 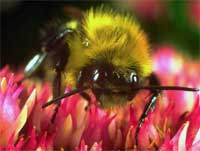 Whatever the cause, CCD remains a real threat to agriculture. About a third of all American farm production is dependent upon the pollination efforts of commercially-raised honey bees. While diversifying the stock of insect pollinators beyond just one species of honey bee would certainly represent a step in the right direction, re-jiggering the nation's agricultural system represents no small challenge.

Not surprisingly perhaps, organic beekeepers have not experienced CCD, leading to speculation that overall greener management practices could be the answer even if direct causes are not determined. Meanwhile, efforts to genetically modify bees that are resistant to predators and pathogens could also prove fruitful, although such high tech solutions are still untested and could open up other cans of worms.