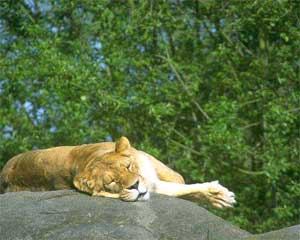 I absolutely think Mt. Lions should be hunted in California!

We issue depredation permits which cost the taxpayers money when we can issue the same amount of tags for hunting and make the state some money!

These people in Southern California need to wake up.

Just this week a large cat (there were actually two cats) attacked and killed a woman's dog as she walked the dog with her baby carried on her back, across from Pie in the Sky Pizza, in Sierra Village.

The husband was able to chase the lion off by firing a shotgun in the air.

Frankly, I would not have been firing in the air and there would have been two dead mountain lions if I had a shotgun in my hands!

I have not been able to confirm this report yet, since it has not been covered in the Daily News of Record. While Googling news on it I came across your site and Annette's comments.

I too have long advocated returning to hunting the lions again as they've lost their fear of man. An alternative that might also serve, would be to legalize mock hunts with dogs. The hunters would be able to use their hounds again and hunt until treed, then ending the hunt. I believe after a dozen years or so they newly birthed lions would have a healthy respect for both man and dog.

I did come across an informative link showing the higher incidence in CA of attacks.

Lemme know if you find confirmation.

The News of Record for Novemeber 5th, 2009 has one incident posted but it happened in Crystal Falls, not Sierra Village. I wonder how many incidents go unreported in this area?

11:27 p.m., Crystal Falls — A woman on the 21000 block of Crystal Falls Drive reported that a mountain lion chased her husband through her backyard.

Another incident was posted in the News of Record for Oct. 27, 2009

9:47 p.m., Big Hill area — A man said he could not leave his house because a mountain lion was screaming and pacing back and forth between his home and vehicle on the 16100 block of Big Hill Road.

I think I would have skipped work that day.

I think they should open a season for mountain lion hunting. Every year there are fewer and fewer deer out there, probably due to so many mountain lions. I hunt in the D8 zone and each year I see at least four lions during the season. Twice I saw two together.

I've talked to some people in a small community called Glenville and every one agrees that the wild cats are getting out of hand there. Mountain lions are killing livestock and family pets. I think they need to legalize hunting lions again before the problem worsens.

I live in the mountains and while we've seen signs of mountain lions, it's been a long time since we've actually seen one. We do live in an area that is blessed with lots of deer traffic. This year we've seen more deer than we have in many years. Lots of twins were born this year. We certainly haven't noticed a decline in their population.

Annette Hall is wrong. Mountain Lion hunting is certainly not allowed in every state in the country. Second of all, if you feel you are and your kids are in such danger it would be irresponsible for you to continue living in wilderness country. Move behind a strip mall in Pennsauken, NJ.

If you don't like living around wildlife then don't. I think everyone of you who are in favor of hunting these beautiful creatures of God are ignorant cowards (really I would love to use another more harsh word instead of cowards). Take your rifles and move to the city.

You say that I am wrong, yet you fail to name any other state where mountain lion hunting is not legal. If you are aware of another state, please enlighten us.

As for the rest of your comments. I personally love living so close to nature. I am certainly not afraid but just as those who are living in the city must keep an eye on their wallet, those of us who live alongside nature must be aware of our surroundings and learn to be smart about it and most of all learn how to protect our families and pets.

We don't own a single gun — unless of course you count our BB Gun, which we use to frighten away the raccoons, who love to torment my cat and get into our trash. Though I will say, I'm not opposed to responsbile gun ownership. My family comes from a long line of hunters and gun owners.

Any time the wild game population is "managed" by politicians, science and the facts are ignored and problems develop unchecked.

Look no further than the wolves, the bears, or the lion populations. Biologists' involvement is mandatory and population controls must be employed where animal populations and habitat are out of balance or pose a threat.

Department of Fish and Game managed hunting of game species is necessary to manage the resource. Politics have no place in it. The eco-nazis will sacrifice humans to protect predators.

I vote to hunt the Lions.

I have lived in the San Fernando Valley in Southern California for nearly 50 years and had never seen or heard about mountain lions in our area. Many neighborhoods next to the foothills now have warning signs posted at the entrance of trails. These homes have been there since the 50's and sixties with no new building or development going on.

Do I think that we are encroaching on their territories? Maybe 10% but the other 90% is that they are simply and unavoidably expanding their ranges in spite of what you may hear from the media every time there is an attack.

As for the population levels currently in the state, I believe that the stated "6-8,000" is very conservative. I have read from other sources that place it much higher. I guess the DFG is afraid that they'll get sued by some animal rights groups for giving a more realistic figure to the public.

Resume mountain lion hunting in California by all means. When I read that the beasts are a common sight in Griffith Park, it seems that California, like Colorado where I now reside, is overrun with cougars, period.

Frontiersmen killed these beasts for a reason. They are dangerous predators. I have a friend who is a treehugger who feeds raccoon and skunks in her yard high on a hill in California. I warned her about attracting mountain lions and coyotes to her yard. She fluffed me off immediately.

Some people prefer the Disneyesque versions of wildlife. Dumb and dumber, I say.

I think hunting them should be legal.

I live in Tollhouse, CA and there have been mountain lions sited in this area. We have one neighbor who allowed one female to have her den on her property year after year. Her closest neighbor has lost two Rottweilers and her cat to the mountain lions. Their were lots of other possible foods at hand as well... the neighbor kids enroute to catch the school bus.

Raaachael at Lincoln was kind enough to write and share her opinion, she even included a link.

Its pretty closed-minded of an adult to actually convince themself that the attacks have increased because the mt. lion population has. You're actually ten times more likely to be killed by a domestic dog. Yet, I dont see you telling people to kill man's best friend. Your answers are just a lack-of-information opinion.

"Let's hope cooler heads prevail and the decisions are based on facts and not emotion." Your facts are biased and you only look at the facts you want to see that support your opinion. You haven't even made the effort to know the opposing team and just automatically assume that people want to save lions due to their 'emotions.' get a grip. Get new numbers.

Mountain Lion Attacks On People in the U.S. and Canada

I actually live in the High Sierra's and we have seen mountain lions in our backyard. There are millions of acres of land and plenty of open spaces up here for them to roam. Numerous residents actually reported seeing 6 mountain lions taking a stroll right down the middle of the road. Two momma's and their cubs.

Every state in the nation allows mountain lion hunting, with the exception of California.

Not everyone gets freaked out when they see a mountain lion and calls animal control or what-not, so I don't believe for a minute those numbers (for attacks) are correct. In fact, my father-in-laws's dog was cornered by a mountain lion, had it not been for the dog, dear old dad could have been in serious trouble. (The dog was fine, just in case you cared to ask.) And no he did not report the incident.

People who live in the mountains know to keep their distance and realize what the dangers are, it's not uncommon to find mountain lion tracks in the snow. Unless someone were actually killed by a mountain lion in these parts, it's unlikely the event would be reported and thus counted.

Unless you live in area with a growing number of mountain lions and have children that you are concerned about, you couldn't possibly know what I am talking about.

I think that mountain lion hunting must be resumed in order to keep their population in check and, more importantly, to allow citizens to safely enjoy their lives. Because of a growing mountain lion population in my area (there were no mountain lions here when I was a kid), I am deprived of my right to the safe enjoyment of my property. I am opposed to any form of protection for predators that are posing an imminent danger to humans.

Do you live in Mountain Lion country? We'd love to hear from you. What do you think? Should Mountain Lion Hunting resume in California?