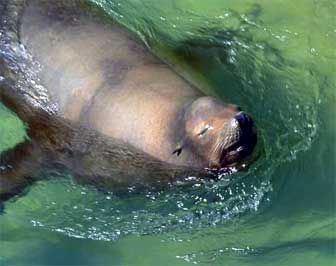 I received this e-mail in response to the Mountain Lion Hunting article, which ran recently. The reader brings up some interesting points, which I had never considered. Society will continue to face tough decisions in our future.

As each state is forced to make laws, which will determine how man and beast will share our most populated lands. We must keep in mind that just as we find a balance exists in nature, man must learn to balance human lives with the protection of nature. An error too far in the wrong direction could have a drastic impact on both man and beast. It's up to us to be caretakers over what we have been entrusted with.

I just watched an in depth look at Great White sharks off the coast of Africa.

I believe there is a direct link to the increase in shark attacks as we become "protective" of not only the predator, or the shark, but also, as we protect the sharks main course meal, the California Sea Lion. For years I recall as a child shooting at sea lions that invaded our area, as we were salmon fishing. Some were even rumored to have kill them, although I was never that accurate of a shooter.

Now, however, due to our fear of protection of wildlife, I have never seen a sea lion shot at, nor do I know anyone with so much courage.

So, why did the shark attack occur last year in Avila Beach, California, a place where I have swam many times?

Because, in my opinion, we do not shoot at the sea lions in our harbors anymore.

The prey is not afraid of man, and neither is the predator feeding on the same prey, so, yes, the incidence of mistaken shark attacks will increase.

The National Geographic Channel simply recommends staying out of the water during early and late morning and evening hours, not wearing contrasting clothing, and not swimming or playing near people fishing.

These are very soft measures, considering drastic measures will probably not be taken until more lives are lost.

We are now at a point in history where we prioritize an animal life over a human life.

Such is the example when we look at abortion and animal rights.

How many people do you know who have spent countless thousands of dollars keeping their pet cat alive? Chances are, that same person has also taken the life of an unborn child. These are the bigger issues.