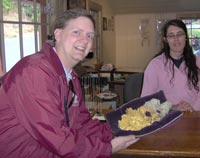 Dec. 14 - KGO - The 49ers found gold in California more than 150 years ago, but experts say 80 percent of it remains undiscovered. ABC7 travels into "them thar hills," to join a modern day gold rush.

Drilled into the hard rock of the Sierra foothills about an hour north of Nevada City, the original Sixteen To One is the oldest continually operating gold mine in the United States.

More than 37-miles of dark, drippy, reinforced tunnels snake through the original Sixteen To One where just a few years ago, one million dollars of high grade gold was hauled out in a single day.

These days, gold's in short supply and miners are spending more time moving mounds of muck than bringing out precious metal. But the mine's president is convinced that a huge gold discovery is just around the corner. [Read More...] 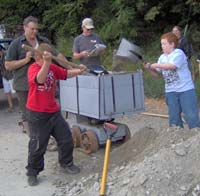 ALLEGHANY, CA -- The fourth annual "Old Alleghany Day" was held on September 10th, 2005, complete with old west style gun fights and street vendors peddling their wares. Our family was fortunate enough to be able to attend this rather unusual, festive event. Shawn and Zachary even found time to get in a work-out to boot; they both entered the "mucking" contest.

If you've never heard of "mucking" don't feel alone, I hadn't either. "Mucking" consists of shoveling the broken rock "muck" that's left after drilling & blasting, into a cart that runs along tracks, which resemble train tracks - for ease of removal out of the mine. The men (and boys) were timed on how fast they could shovel the muck into the cart. The winner had an incredible time of 35 seconds. One underground miner/competitor commented that it only counts if you can do it all day. Ouch! 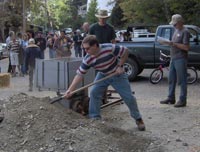 Zachary and his teammate came in second place in the children's division. Since my son has never even held a shovel in his hand, I'm certain his partner had a great deal to do with their excellent standing. The boys worked hard and had a good time and that's what counts. Shawn had a respectable time of one (1) minute even. Not bad for a computer geek who spends his days earning a living as a keyboard cowboy. It took him only seconds to figure out which end of the shovel to use and put it to good use. Seriously though, it was incredible to watch these men work. They really put their heart (and back) into their work with nary a complaint. 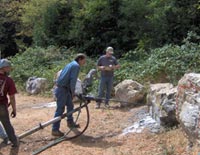 A hard rock drilling contest was held as well, with some of the most experienced drillers in the state participating. It was incredible to watch as the men worked the drill into the huge boulders of hard rock. Shawn had seriously considered entering the drilling contest but watching those miners struggle with a drill larger than most men, I think helped convince him to sit this competition out. I know I was relieved when he signed up for the mucking contest instead.

No trip to Alleghany is complete without a trip to the Underground Gold Miners Museum. The museum is a facinating place, with a mixture of gold and grit on display. The pictures tell the story of a hard life, lived at least partially underground by rugged men and women who worked hard, played hard and settled in this majestic place. Occasionally on special days such as this, "The Whopper" is put on display, as it was on this day. 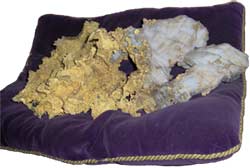 The Whopper - 140 troy ounces of gold

The piece was very heavy, weighing in at 14 pounds and containing 140 troy ounces of gold. The Whopper is valued at $1.4 million dollars. It's the most spectacular piece to come out of the mine in modern history. The Whopper was blasted out of the mine in August, 1993 by a very excited, Glenn Knapp. We were actually allowed to hold the pillow, on which The Whopper rests. I am uncertain if it is permissible to actually touch the sparkling gold specimin. We were too in awe of it, to even think about touching it.

Established in 1896, the Sixteen to One Mine is a unique "pocket" mine where gold is found in highly concentrated deposits within the quartz vein. The mine has produced over 1 million ounces of gold and is famous for its quartz and gold gemstone sought by jewelers. Visitors can view the many pieces on display of both quartz and gold jewelry at the museum.

All mine tours begin at the museum where you will be told the history of the Alleghany Mining District and the Sixteen to One Mine. The mine even has a program, conducted by the mine geologist, to help Boy Scouts earn their Geology Merit Badge. The museum had some very interesting displays and artifacts from the mine. I was disappointed because we ran out of time and didn't get to watch the video presentations available for visitors. Maybe next time. 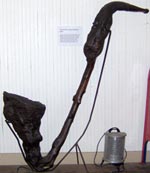 Underground Gold Miners Museum is home is to what is believed to be the world's largest pipe.

You can tell when people have too much time on their hands and the maker of this pipe definitely had spent too many winter days with nothing to do.

The pipe was made using a deformed walnut tree by Don Bell. The pipe is lined with copper tubing and originally had a small mouthpiece that screwed in making it smokable by mere mortals. In 1972, Don submitted a photo to Guinness' book of world records. They wrote back saying there was no competition for the pipe so they could not verify whether or not it was the largest in the world.

Alleghany is probably the only California community that has continuously had a gold-based economy since the gold rush days. The town evolved from the mining camps of Smith's Flat. In 1853 a group of miners from Allegheny Pennsylvania (now part of Pittsburgh) named the town, spelling Alleghany with an "a" rather than an "e".

In November of 1857 the post office was moved from Chips Flat across Kanaka Creek to Alleghany. As with most early California gold rush towns the population was very diverse. Individuals came from many locations to seek their fortune here. Early population figures for the town are not available. Census records of the district and immediately surrounding communities range from 2,116 in 1860 to 1,183 by 1880 and 712 in 1900. In the 1930s Alleghany had a population of roughtly 500 residence. Currently about 80 people reside in the town.

The building which now houses the museum was originally the town's livery stable. After a major fire burned the downtown district in 1933 the stable was converted to a General Store and Post Office.

Constructed by the Bovee family in 1870, the building which now houses Casey's Place was a dry goods store for many years. David Casey bought the building in 1929 and established "Casey's Place". During Prohibition the street level was a store and a "speak easy" was in the basement. 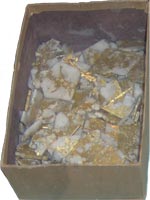 The Red Star Café was originally a PG&E office, then it served as a residence. After fire again struck the Main Street businesses in 1989 it was converted to a restaurant. The restaurant, which had been closed for some time now opened for business for "Old Alleghany Day."

Engraved bricks are being sold to help build a walk of memories and stories while contributing to the restoration and preservation of this historical building. The bricks will be used for a patio that will be located at the bottom of the front steps. For a $60.00 donation you can have a brick etched with up to 3 lines of 20 characters each. Bricks may be purchased by contacting Rae Bell Arbogast at (530) 287-3223 (weekdays only).

The Original Sixteen to One office is located in what was originally built as a community hall and school gym in the 1930s. The ticket booth where movie tickets were sold can still be seen on the front of the building.

Since this story ran, insiders report that "The Whopper" is currently for sale. Interested purchasers should contact The Original Sixteen to One, for purchase details and additional information. We've also learned that Gold Mine investors are actively being sought at this time. Investors both small and large are welcome.