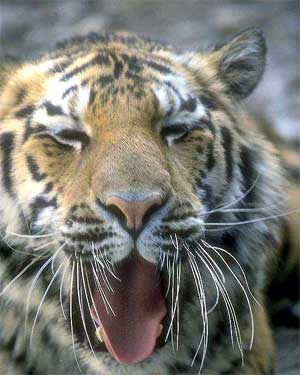 An Anthropocentric Point of View

Hi. This letter is in response to the "mountain lion hunting" article I read by you. First, I would like to explain what my view is on this subject — I feel that all life is sacred. These lives include that of my fellow humans and all other life that we share this world with. I live for a world in which we can coexist with one another and realize and honor the importance of all life.

With that said, I wanted to point out that that article and many of the view points seemed to be anthropocentric in nature (regarding humans as the most important element of existence), and I wanted to do my best to balance the story a little.

Cougars themselves are the other prominent factor in population control. If cougars are competing for food in overlapping territories, they will defend their territory resulting in the fatality of one of them. In this way, cougar populations are under natural control. Any increase in cougar population is due to the fact that their numbers have been reduced below healthy sustainable levels by human actions. Ecology dictates that, left unharmed, their numbers will increase until they once again reach a stable plateau that is in balance with their environment.

Note that their environment is significantly smaller than it was, due to human encroachment, and would support a smaller population than it previously had. Mountain lions are also an integral element in their ecosystem and are necessary to maintain its health. If mountain lion prey species are left unchecked, they would eventually proliferate beyond sustainable levels, consume their resources into exhaustion and perhaps go extinct themselves. Cougars keep the later from happening and can help maintain the biodiversity of ecosystems by preventing a single species from becoming dominant. They also keep smaller predators like coyotes, foxes and bobcats in check.

Cougar population may be increasing as it moves back toward its equilibrium, but far more notable is human population increase. California's human population has steadily increased from 92,500 people in 1850 to 36.5 million in 2007. Our population has increased nearly 400 fold in 160 years. The more people there are, the more space is needed to house them and their growing society. As humans continues to expand further into shrinking environments that once supported cougars, it would make sense that there will be more encounters and conflicts between the two species. This observation is quite elementary and takes no scientific knowledge to figure out.

There's also no evidence that hunting puts the fear of people in mountain lions. British Columbia has the continent's highest rate of cougar attacks despite heavy hunting.

If we let go on anthropocentrism and switch places with cougars in California, here is what we see:

"Another species' population and territory are expanding at an exponential rate. There are currently around 3000 to 6000 of them for every one of us and they continue to grow. They continue to displace us by expanding into territory that was once our homes. They also have contiguous travel routes that they build across the land. They travel at very high speeds by the millions in their vehicles. Many of us are struck and die trying to cross these routes across our territory.

They made laws to protect us from their hunting, but with their growing civilization they have encounters with us more often. Our lifestyles are in conflict with theirs. The more often our lives meet, the more of us they label as a problem. The result is they end up killing more of us each year than they did before. We cannot protect ourselves from their society and their guns and traps.

In conflicts with them, we have killed 6 of their kind in the last 117 years. They kill 100 of us each year. For every one of them we kill, 1950 of us are killed by them. Most of them do and take what they like from this world unchecked. How will this turn out for us?"

Through an anthropocentric point of view: "Our population is increasing. Our lifestyles conflict. There's not enough room for the two of us. We are more important than you. You need to be killed off to levels that we deem appropriate." If you were on the cougars' end of this argument, how would you feel about that mentality? I personally would feel like there is a cruel injustice going on. I would think how my kind are being hunted down and killed because humans' population is expanding far beyond what is sustainable and taking over what has been our homes for thousands of years.

It seems that many people's hostility toward mountain lions is from fear for their safety and/or that predators, especially large ones, are deserving of enmity because they part of their lifestyle is killing. One person stated, "Because of a growing mountain lion population in my area (there were no mountain lions here when I was a kid), I am deprived of my right to the safe enjoyment of my property. I am opposed to any form of protection for predators that are posing an imminent danger to humans."

If we look at this from the other perspective, we can see that humans have done to pumas exactly what this person doesn't wish done to themself. Something else to look at is "is absolute safety an actually right in life?" As nature demonstrates death is an integral part of life. There are predators throughout all of the world's environments. Humans kill living beings on a regular basis for our food. Though most of us are disconnected from the killing of our prey, we are nonetheless responsible for their death.

I'd say the way that most of modern society treats their prey (factory farming and similar methods) is cruel and entirely inhumane, but that's another matter. Humans have hunted animals for meat for millennia and we continue to kill for meat to this day. Is it not odd to have ill will toward another animal because they kill for meat? Is it not also odd that we have ill will toward an animal because we consider them potentially dangerous to us when we are undisputedly the most dangerous species on the planet, hunting or driving hundreds of thousands or millions of species to extinction?

I'd say we can, of course, do things to protect ourselves from dangers in the world, but can we say we have the right to manage others' lives through killing when it's we who have crossed the line. Can we honestly move into another family's house and say we have the right to kill those of them we consider a threat. We have often done this in the past and still do so today to other humans. We do this to our fellow animals with far less reservation. But is this a just way to live?

This conflict with pumas is just one of many problems that occurs with a destructive way of life and unbridled growth of a population with a predominantly destructive relationship with its world and neighbors. It's fairly easy to see that our species are far removed from the balance that allows life to exist together in relative harmony and maintain a healthy equilibrium.

If we work together to solve these problems in a holistic way, we can once again join that equilibrium with our fellow beings. We can all live. What benefit does this have for us? Well, our current civilization is totally unsustainable, meaning that if we continue this way, unaltered, we will either cease to exist (probably within the next few hundred years), or be forced to develop space colonization technologies that allow us to continue our destructive ways.

More likely as our population grows and our destructive lifestyle continues, these are some of the things we will probably face: resources will become scarcer and scarcer, poverty and famine will increase in severity and size, epidemic diseases will grow, reduction in air quality and its affects on health, food crises, accumulation of toxic and/or non degradable wastes, and warfare over resources will become more common and severe. All of this will affect the quality of life on Earth in a severely deleterious way.

There are alternatives to this future that we have the collective power to bring about. Many indigenous peoples from around the world have lived in harmony with their surroundings for thousands of years. We can again live in harmony with the earth and thrive with a rich quality of life if we choose to. One suggestion for a path toward this way of life would be to take only what we need, honor the earth that sustains us, honor all life, realize that all life is important and connected, accept death as a part of the cycle of life, value others as we would value ourselves, live with balance, love each other and love life.

Here are some similar tenets from deep ecology:

I love my fellow humans, I love my fellow creatures, I love this earth, and I love life. It is my sincere hope that this message creates a positive impact in those who read it and in the world.

May the way be with you.
Mikko Asaki