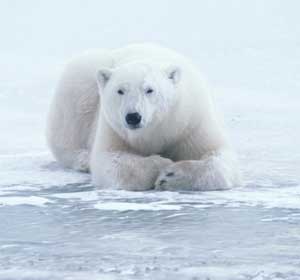 The Center for Biological Diversity predicts that two-thirds of all polar bears — including all of Alaska's polar bears — will be extinct by 2050 if current warming trends continue.
Image Compliments of Getty Images

Dear EarthTalk:
Some say that polar bears are going to disappear in 50 years, but Alaskan officials insist their populations are recovering. What's the real story?

There is no doubt that polar bears are in serious trouble. Already on the ropes due to other human threats, their numbers are falling faster than ever as a result of retreating ice due to global warming. The nonprofit International Union for the Conservation of Nature, which added the polar bear to its "Red List" of the world's most imperiled wildlife back in 2006, predicts a 30 percent decline in population for the great white rulers of the Arctic within three generations (about 45 years).

The nonprofit Center for Biological Diversity presents an even more pessimistic forecast. If current warming trends continue, they say, two-thirds of all polar bears — including all of Alaska's polar bears — will be extinct by 2050. Both organizations agree that the species as a whole will likely be wiped out completely within 100 years unless humans can get global warming in check.

The erroneous notion that Alaska wildlife officials don't believe the polar bear is in trouble was put forth by Alaska governor Sarah Palin when she initiated a suit against the federal government in hopes of overturning its decision to include the polar bear under the umbrella of endangered species protection.

"I strongly believe that adding them to the list is the wrong move at this time," Palin wrote in a January 2008 New York Times Op Ed piece. "My decision is based on a comprehensive review by state wildlife officials of scientific information from a broad range of climate, ice and polar bear experts."

Alaska professor Rick Steiner uncovered the misinformation in Palin's claims when he found evidence that the state's top wildlife officials agreed with federal findings that polar bears are headed toward extinction: "So, here you have the state's marinemammal experts, three or four of them, very reputable scientists, agreeing with the federal proposed rule to list polar bears and with the USGS [United States Geological Survey] studies showing that polar bears are in serious trouble," said Steiner.

A solid link between global warming and polar bear mortality emerged in 2004 when researchers were surprised to find four drowned bears in the Beaufort Sea off Alaska's North Slope. The meltdown of sea ice — the polar ice cap had retreated a record 160 miles to the north — forced the bears to swim unusually long distances to find solid ice, which they depend on as hunting and fishing platforms and for rest and recuperation. And more recently, USGS researcher Steven Amstrup published findings that polar bears are "stalking, killing and eating other polar bears" as competition for scarcer food heats up.

Beyond global warming, other risks to polar bear populations include toxic contaminants in the surrounding environment as well as in the fatty tissue of the prey they rely on, conflicts with shipping, stresses from recreational polar-bear watching, oil and gas exploration and development, and overharvesting through legal and illegal hunting.