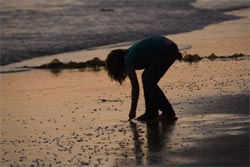 How Safe are our Beaches?

Dear EarthTalk:
A friend of mine refuses to swim at our beach near Los Angeles because the water is too polluted. What is the status of beach pollution, and is it safe for my kids and me to take a dip?

Pollution levels are not the same at all beaches, so local conditions dictate whether or not it is safe to swim in the ocean near you. Local officials are required by federal law to monitor coastal pollution levels and post warnings as needed. But some local water quality officials are more diligent than others, so if you have any reason to doubt the cleanliness of the beach water, it is best to stay out.

Beach pollution originates with a variety of sources, including human, animal, agricultural and industrial waste, as well as leaked motor oil and gasoline, among other contaminants flushed out to coastal regions. Swimming in contaminated beach water can expose people to harmful chemicals bacteria and viruses.

According to the U.S. Environmental Protection Agency (EPA), the most common illness associated with exposure to contaminated beach water is gastroenteritis, which rears its ugly head in the form of nausea, vomiting, stomach ache, diarrhea, headache and sometimes fever. Ear, eye, nose and throat infections can also ensue from swimming in polluted water. In rare cases--though not typically in the U.S. or Canada--swimmers are exposed to more serious diseases such as dysentery, hepatitis, cholera and typhoid fever.

Back in 2000, Congress called on the EPA to update its beach water health standards by 2005 to reflect increased pollution over the past 20 years--when the agency last issued standards. They missed the deadline, so in 2006 the Natural Resources Defense Council (NRDC) filed suit against the EPA for failing to honor its Congressional mandate. On the same day it filed suit, NRDC issued a report showing that beach closings due to hazardous bacterial contamination had jumped 50 percent in Los Angeles County last year alone. Further, across the U.S. beaches were closed or posted with health advisories 20,000 times in 2005.

According to NRDC, New Hampshire and Delaware had the cleanest ocean beaches, with contamination exceeding federal safety levels in only one percent of the samples taken. But beaches in California, Florida, Georgia, Louisiana, Maryland, Massachusetts, Michigan, Rhode Island and South Carolina were in violation of existing contamination standards at least half the time water samples were taken in 2005.

NRDC acknowledges that better local monitoring may explain the increased number of closings in 2005, but warns that many beaches deemed safe according to 20-year-old standards may not actually be so. For its part, the EPA reports it will now not be able to issue updated standards until 2011.

North of the border, Canadians can worry less about contaminated ocean beaches due to less developed coastlines. But the Great Lakes that Canada shares with the U.S. are notoriously polluted and the Great Lakes Commission has been working since 2000 to reduce the amount of raw sewage and industrial pollution jeopardizing water quality there. As with swimming at ocean beaches, freshwater swimmers should always check with local water authorities before diving in.