Clicking on each image will provide you with an enlarged view. Don't miss our amazing Penguin photos.

Antarctica, once thought to be a barren, frozen, foreboding land, where many an explorer has lost their life in attempts at overcoming the bitter cold and desolation.

Much to the dismay of the scientific community, Antarctica has recently become, interestingly enough, a popular tourist attraction. These awe-inspiring cruises to the frozen land of Antarctica average around 12-days with the cost for such an adventure running between $3,000 and $10,000, depending on the length of the tour and the accomodations you require.

The ship shown here is named the "Explorer II" and carries a staff and crew of 146 to accommodate 198 passengers on it's voyages. The Explorer II is just one of many luxury cruise-liners equipped to handle the open-water and icy channels of Antarctic seas. Her speed, ice-strengthened hull, stabilizers and bow thrusters give her the power, stability and agility necessary to ensure a safe, smooth passage for all on board, something I sure anyone attemping such a cruise appreciates.

Once thought to be an immense wasteland, this frozen land is a whirlwind of wildlife set amidst breathtaking geography. The backdrop of hanging glaciers, massive blue-tinged icebergs, and magnificent near-vertical mountains astound even the most seasoned traveler. A journey to Antarctica is truly a once-in-a-lifetime voyage to the last unspoiled continent on earth.

A layer of ice up to two miles thick covers a continent as big as the United States and Mexico combined. Antarctic ice contains 70% of the world's fresh water (90% of the world's ice). Although 98% of Antarctica is ice, there is land underneath the ice cover, unlike the Arctic where the ice floats on top of the ocean.

Wildlife is amazingly abundant given the extremely cold temperatures, which can plunge to unbelieveable lows. The coldest temperature on Earth was recorded at the Russian station at Vostok, Antarctica with an amazing reading of -128.6 F in July 1983! 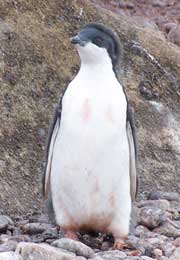 Located far below the southern tip of South America the awe-inspiring continent of Antarctica is home to vast colonies of penguins covering rolling hills of ice, great whales feed in the nutrient-rich waters, and millions of fur seals spend their days lounging about on drifting ice floes.

Antarctica is home to 17 species of Penguins. Penguins are flightless birds, which have adapted to living in the cooler waters of the Southern Hemisphere. Some species spend as much as 75% of their lives in the ocean, yet they all breed on land or sea-ice attached to the land. 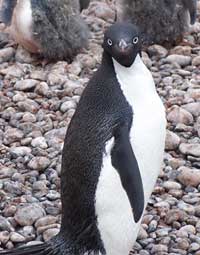 A total of 2.5 millions pairs of Adélie penguins currently breed on the Antarctic continent and the small islands around it, the largest concentration being encountered in the Ross Sea region (1,000,000 pairs).

The birds pictured here (above) are called Gentoo Penguins, and are the most numerous penguins in the world. Around 12 to 13 million chinstrap penguins live on the barren islands of the sub-Antarctic Region and the Antarctic Peninsula. These penguins live and breed in large colonies. They often live on large icebergs on the open ocean.

The Penguin breeding cycle is synchronized to the Antarctic summer, which runs from October through April, to take advantage of the light sea ice and the peak in marine resources that occur at that time. Adélie penguins lay one or two eggs, each weighing 100g to 125g (about 2.6% the female body mass). The eggs are incubated alternatively by each parent for a period of 30-40 days. This short incubation period (in comparison with that of Gentoo or Chinstrap penguins) is due to the short Antarctic summer.

Newly-hatched chicks are incubated by one parent while the other feeds at sea, the parents change off incubation duties every 1 to 3 days. This guard phase lasts 22 days and is followed by a "crèche phase" during which both parents forage at sea, and unattended chicks gather in small groups of 3 to 20 chicks, called crèches. This gathering reduces the risk of predation and helps to protect the chicks from severe weather. Fledging occurs after 52 to 61 days, with an average of 77% of chicks surviving to fledge.

Antarctic penguins are highly social birds which usually breed in large colonies called "rookeries". Healthy adult penguins have no predators on land, as such they have no natural fear of humans. While they don't like to be approached directly, they will sometimes come quite close to a quiet observer due to their own natural curiosity. 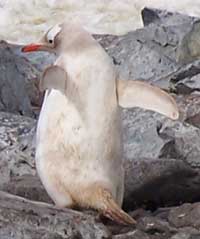 Albino Penguins are extremely rare in the wild according to a BBC News article, which ran in 2002 entitled, Albino penguin 'one-in-a-million' The albino mutation interferes with the production of melanin so no black pigment is produced. The albino penguin is not affected physically, she just looks lighter than the others and can forage and feed her chicks just as well as the rest of the penguins. The albino penguin shown here is not a "true" albino (she has dark-colored eyes), our albino is called an isoblene or leucistic, so her eyesight is most likely as good as the other black and white penguins.

Antarctica is a continent of contradictions: volcanoes erupting from a frozen landscape; miles of snow and ice, yet hardly any snow falls each year; an arid land surrounded by three oceans. One wouldn't expect to find so many volcanoes in such a frozen land.

Mount Erebus is only one of the many volcanoes located in Antartica, it has an elevation of 12,444 feet and is located on Ross Island in the Ross Sea. Erebus is an active volcano with a convecting lava lake within a summit crater. It has been continuously active since 1972. Most eruptions are small and Strombolian in character, tossing bombs onto the crater rim.

Several other volcanoes, which have erupted on Antarctica this century are:

Antarctica For the Little Ones

Antarctica Outhouse on the Dock

Explore Antarctica from the comfort of home! 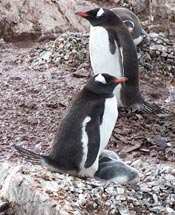 You are authorized to download a copy of as many of these images as you would like for use on your personal computer. You may not reuse these images on your own website or reproduce them for distribution. Any other use requires express written permission.

This page is intended to offer resources for the student fascinated with Antarctica, seeking more information on the subject. The pictures included here were all taken by Herb Coleman on a recent trip to Antarctica. Many thanks to Herb for sharing his wonderful work with us. Be sure to see Herb's streaming video about his Falkland Islands Tour. Thank you for your interest in Antarctica.