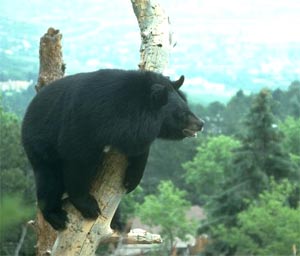 Black Bear up a tree

Living in God's country surrounded not only by the towering pine trees but also by creatures great and small can be a simply delightful experience and is often fraught with unseen dangers as one local resident discovered quite by accident.

In Tuolumne County, nestled in the Sierra Nevada mountain range the locals have become accustomed to breaking for deer that roam wild and free by the thousands. Judging from the number of deer in my own neighborhood, especially the number of twin fawns that were born this year, we could be headed for a pretty rough winter. Nature does have a way of keeping itself in check.

We saw a large increase in the number of birds flocking to the feeders as well and with the cost of bird seed these days, I'm not so sure that's a good thing. On the rare evening when we are able to take a break on the deck, just about dusk, a handsome fox has been seen trotting through the yard. The first time I thought it was a fluke but he's been spotted on several occasions.

Sugar Pine Ridge is located about four miles north of Twain Harte, residents there have been literally up in arms all summer over the number of bear visiting their bird feeders and garbage cans. The bears have ranged in size and surprisingly even in color. The first bear to cause a stir in the area was a chocolate brown bear about two-years in age. He seemed to really enjoy the black oil sunflower seeds, until he destroyed the feeder that is.

Despite their name, most American Black Bears in the High Sierra are not black in color. Most are a shade of brown, ranging from blond, to reddish brown, to a dark chocolate color. Truly black black bears are relatively rare here.

Then the huge black bear came along. He must have stood around 7 feet tall and weighed in at about 600 pounds. This stately fellow didn't make any friends at all — especially after he broke every single branch from one neighbor's apple tree, devouring the contents of its branches.

Several others have come and gone and by rights Sugar Pine Ridge dwellers shouldn't have been surprised, after all, they live in a heavily wooded area that is still relatively secluded. However, you can imagine our surprise when we received a visit from what we suspect was this very same bear, attempting to open a feed bin kept under our deck. (Thank goodness for locking lids.) 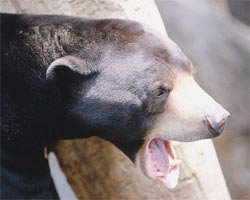 Night after night the bears have been spotted not only visiting the neighbors on the ridge but also roaming through the neighborhoods of Twain Harte. The bears don't seem to have any sort of time schedule; they have been sighted foraging in the hours shortly after dusk, up until the pre-dawn hours. At least one of the infamous bears enjoys hummingbird food and has left many broken feeders in his wake.

After our first couple of encounters with our furry friends we took it upon ourselves to notify our immediate neighbors and called the local sheriff department, who didn't seem at all shocked or surprised by the news. Bear sightings must be a far more common occurrence in Twain Harte than I thought.

At least one bear may be traveling to Modesto though — I wonder if he packed his bags? According to a recent news article, a bear was sighted in East Sonora rummaging through Edna Siebert's garbage at 2:30 in the morning.

One Sugar Pine Ridge resident remarked that he's lived in the area for years and has never seen so many bears. Locals speculate that the summer forest fires may have played a role in displacing the bears or that the bear population is on the rise and the bears are expanding their territory in search of food.

We may never know the exact reason for the recent increase of bear of sightings but it's almost certain we haven't seen the last of them. Here is a list of helpful tips on how to avoid a confrontation. 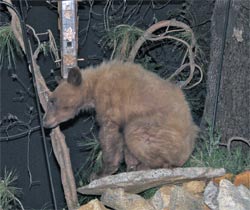