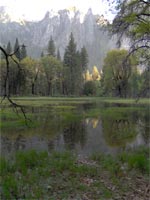 Yosemite in the Spring with Photo Gallery

Yosemite never looked so good as it did last Spring (2006), with everything vibrant and alive. The waterfalls were flowing freely, as if someone had turned on the faucet full-bore. Lines at the entrances were long and traffic was a steady stream along the Yosemite valley floor. Long-time Yosemite visitor Maureen Hall said traffic conditions were the worst she has ever seen at Yosemite in the over 60 years she's been going.

Due to Spring flooding caused by unusually heavy snowfall over the winter months the Yosemite Valley was a congested tangled mess of motor vehicles.

Many areas inside the park have been closed due to the flooding, causing traffic congestion so severe it took hours to make our way around the Yosemite Valley floor. At one time traffic was so bad they actually had a ranger directing traffic, which only seemed to make matters worse.

Park Rangers had closed Highway 140 from 3 miles east to 11.5 miles east of Briceburg, near Savage's Trading Post, after a rockslide that took out a huge portion of the road. The rock slide was so bad that Cal-Trans refused to allow the publication of photo's taken by rafters when the massive rockslide occurred. 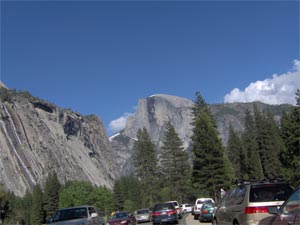 Park visitors who braved wading through the flooded path to view lower Yosemite falls were treated to a spectacular view of the falls, complete with a heavy shower from the viewing area. The Merced River was spilling over onto the trail and moving so swiftly parents were carting children on their shoulders. The frigid water flowed freely over the path, just below the knees of most hikers, who waded the 60 yards or so in order to get a closer view of the Yosemite Upper and Lower Falls.

Anyone planning a trip this time of year to Yosemite should be prepared to arrive early. We entered the park from highway 120 and spent over an hour in line, just to gain entrance to the park. It is my understanding that the other entrances were similarly congested. I would highly recommend avoiding the weekend crowds and plan to visit during the week. I noticed that all the campgrounds were full when we visited, due to the closure of several areas of the park. Be sure to make early reservations for lodging or plan to stay in an area outside the park.

On a side note: To the gentleman that followed us for several miles, blowing his horn the entire time, I'd like to say, "What were you thinking?" Blowing your horn does not make a car go any faster.

Driving around hairpin turns at 6500 feet going 50 miles an hour is simply crazy - yet some people seem to think that's a smart thing to do. I am not one of those people, especially when I have my son in the car. So, kindly remember that just because you have a death wish does not mean that everyone else shares your view. Slow and easy does it.

Yes, a trip Yosemite is a grand thing but be prepared for long lines, closed areas and bring along plenty of patience with you, because you'll need it. Yet, I've never seen Yosemite look so lovely, so alive and so inviting. You can experience everything in life at Yosemite. I was amazed to find such diversity in a single day at the park. Not only were we treated to a beautiful warm sunny day, but we also experienced flooding, fresh air, exhaust from the vehicles, wildlife, swarms of people, quiet solitude, brilliant colors, a drab gray landscape and some of the most beautiful and unusual plant life anywhere. The park is truly spectacular this time of year.

Items you will want to remember to bring: 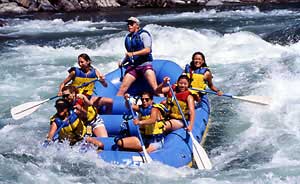 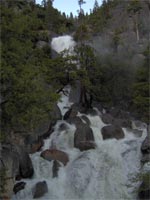 More Water on the Way

With the 2008 winter run-off flowing at 130% from what visitors experience in a normal Spring, travelers can expect more of the same in the coming weeks. In fact, a local river expert reports that he expects the flood waters to rise another two feet over the next two weeks. All that extra water will make the job of overseeing the influx of traffic an even larger problem than park officials are already being forced to manage.

Before you decide to make the trek to the Yosemite Valley this Spring, do yourself a favor and check road conditions, plan ahead and allow yourself plenty of time to reach your destination. If you are the adventurous type, whitewater rafting is huge this season. The Merced River is flowing fast and hard. Age and weight restrictions are being enforced on all rafting trips, so be sure to call ahead and make reservations well in advance. Rafting trips are filling up quickly.

I was a very little girl when we started our years of camping in Yosemite. In those days there were very few people in Yosemite and we had our pick of where we would camp. Our very favorite spot was in Camp 14 on the meadow. From there we had a view of Camp Curry, Glacier Point and the Firefall. Updated: May 4, 2007